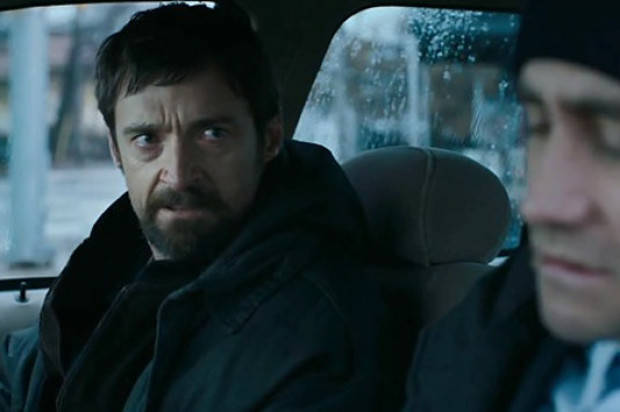 Exploring the bounds of human behaviour and blurring the lines between right and wrong, Dennis Villeneuve’s ‘Prisoners’ is a slow-burning drama that manages to stranglehold you at any given moment as it poses the question in how far you’re willing to go to protect the ones you love.  The premise here is simple – two young girls are kidnapped in broad daylight and when it is believed they have found the man responsible, one of the fathers abducts and tortures him for information on their whereabouts.  As straightforward as it sounds ‘Prisoners’ consistently veers towards the unexpected, never allowing its audience to be sure in their thoughts.

The idea of adults hurting children is without a doubt the most heinous of crimes but thankfully the film downplays any violence allowing the emotional devastation to reign as the most graphic element.  At a lengthy 153 minutes ‘Prisoners’ could easily be accused of overstaying its welcome, particularly with its dire subject matter, but the brilliance of the film is how it maintains focus even if the latter half fails to be as tight.  Indeed the first half is nothing short of masterful as it sets up a perpetually rainy Pennsylvania Thanksgiving as the backdrop to the gloomy nightmarish scenario that is to come.  Keller Dover (Hugh Jackman) and his wife Grace (Maria Bello), along with their two children, are enjoying a Thanksgiving dinner with their neighbours Franklin and Nancy Birch (Terrence Howard and Viola Davis).  When the two youngest daughters of each respective family go wandering outside it isn’t long before the families start to worry when they don’t return home.  The girls are missing.  Detective Loki (Jake Gyllenhaal) is assigned to the case, but there seem to be few forthcoming leads apart from an RV that was seen lurking in the neighbourhood, and even still there’s no guarantee it holds any evidence.  The case appears to be heading nowhere until Alex Jones (Paul Dano), the simple-minded owner of the RV, is caught in a seemingly compromising situation and is brought in for questioning.  Alex has the intellectual capacity of a 10-year old and doesn’t entirely understand the charges brought against him, and if he does have the girls there’s no concrete evidence to prove it.  It’s a frustrating situation, one that Keller eventually takes it upon himself to solve.

On the surface Keller appears almost clichéd in his bible-thumping manner.  After we open to him teaching his son how to hunt, we view his survival gear-filled cellar before hearing him pray.  We could easily dismiss him as a fanatic but thankfully that’s not how he’s portrayed.  Sure he’s religious, and perhaps a bit paranoid, but more importantly he’s a devoted father and loving husband, so when we’re asked to embrace his tactics when he handles the situation his own way it doesn’t feel like we are condoning violence.  The situation is two-fold though as Alex is almost a child himself with his feeble understanding of the world around him, and neither Keller nor we as an audience are sure if he’s responsible, so witnessing the brutality to which he’s subjected to is often unpleasant, leaving us feeling just as helpless and frustrated as those on-screen.

With its aforementioned run time ‘Prisoners’ takes its time in developing its mystery, alternating between tightening and loosening its hold on an unsuspecting audience as it grips us in a pit of palpable despair.  We watch as Keller does some truly horrible things to Alex, whilst Loki uncovers some similarly gruesome evidence in his investigation, each moment presenting a new level of physical and emotional pain.  After succeeding for so long with how ferociously truthful proceedings have been, it is slightly disappointing how “Hollywood” the film becomes towards the final moments when clues come to light in an all too convenient fashion, and the villain reveals themselves only to explain the motives in a bid to fill in all the blanks we as an audience may not have put together.  It doesn’t take anything away from the film for me personally as I was engrossed the whole way, but when stepping back to view the film as a whole the ending felt more conventional than what you may expect given everything that came before.

It’s a minor criticism though as ‘Prisoners’ truly reigns as one of the year’s best films.  In what’s been described as a “career-best performance” Jackman really is fantastic here.  Portraying the tortured and vengeful sides of Keller with equal impact, there isn’t a single false note in his delivery.  There’s one particular scene where he smashes a sink with a hammer in a bid of anger that I dare say will make you gasp as the rage he expresses is terrifying in its ferocity.  Just as impressive is Gyllenhaal as the privately tortured Loki.  With a lack of humour, distinct eye twitch, and a short fuse his character has every good a chance to make or break the case as much as Keller.  Gyllenhaal is particularly imposing here, moreso than he’s been in anything as of late, with an honest performance that hides a sad sense of loneliness underneath all the bravado.  Whilst they aren’t given as much to do Howard, Davis and Bello are all in top form, each delivering heartbreaking performances as mournful parents who won’t resign to accepting the possibility of losing their children.  Bello is particularly moving as Dover’s wife who slips into an almost coma-like state, personifying every parent’s horror in that situation.  Dano is alternately unsettling and sympathetic as a man who may or may not be just another innocent victim of the crime, and Melissa Leo as his guardian is stellar in the kind of stock role that subverts audience expectation at every given moment.

The performances alone make ‘Prisoners’ a must-see cinema experience but the emotional draining I experienced upon exiting make me want to advise audiences to proceed with caution as it’s a subject that will hit everyone hard, especially those with children of their own.  It’s powerful filmmaking that exposes a genuine evil without glorifying it for the sake of entertainment.