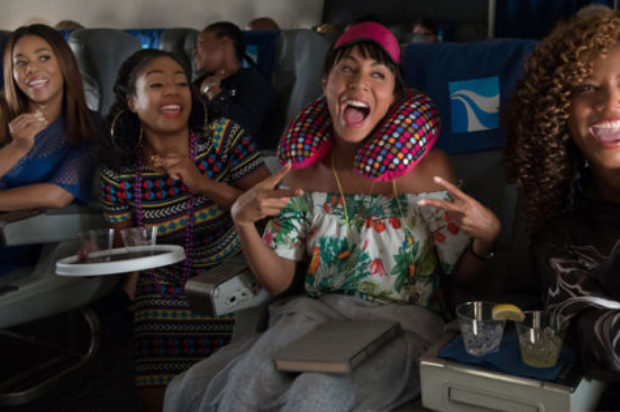 Earlier this year the Scarlett Johansson-led comedy ‘Rough Night’ attempted to make the boys blush with its crude personality and no-holds barred mentality. The results were decidedly mixed, so it’s understandable if a similarly-themed feature like ‘Girls Trip’ earns cautious footing from the general public who as of late have been promised boisterous comedies, only for them to come up short. I can assure you that any fears can be laid to rest with this supremely entertaining feature, one that revels in how simultaneously over-the-top and low-brow it is, constantly remaining likeable and heartfelt throughout.

There’s the simplest of set-ups here as we follow a quartet of girlfriends who have known each other since their college days but have drifted apart over the years due to personal or professional commitments. Excitedly reuniting for a media event to celebrate the next branding chapter for best-selling author and self-help guru Ryan Pierce (Regina Hall), the girls come together in New Orleans for what should be a breezy, slightly boozy getaway. As poised as she proves to be in the limelight, Ryan’s life is spectacularly falling apart behind the scenes due to her husband’s infidelity, but she’s hoping that her gossip columnist bestie Sasha (Queen Latifah), mother-den type Lisa (Jada Pinkett Smith), and loose cannon Dina (Tiffany Haddish) will prove enough of a distraction for her.

As cautious as Ryan intends to be, it’s no surprise that the group get into a hefty dose of trouble, with an unfortunate incident on a zip-line and a rather amusing overdose on absinthe proving two of the stand-out set pieces that successfully juggle crass and comical in equal measure. And as superficially outrageous as ‘Girls Trip’ is, there’s a strong message of female empowerment that resonates throughout, elevating the film beyond the genre specifics you’d expect. It also benefits the film that the lead actresses share an organic chemistry and genuine affection for one another, with there never being any doubt that they sincerely enjoyed working together.

And on the note of the four stars, as comfortable as they all appear to be performing comedy on a physical level, it’s Haddish that emerges as the true standout; think Melissa McCarthy stealing the spotlight in ‘Bridesmaids’ with her vanity-free confidence. With such a command of her character’s irreverent dialogue, there’s a certain tension brought to her delivery as she proves such a livewire that you’re never quite sure what she’s going to do or say next, and the film is all the better for it; I trust you’ll never envision a grapefruit the same way after she explains its usefulness during sex.

Though the film occasionally slips into typical melodrama when detailing Ryan’s troubles with her husband, ‘Girls Trip’ manages to avoid any major patches of lulling material as director Malcolm D. Lee showcases clear investment in his lead quartet, allowing their honest rapport to carry the film when the material momentarily falters. Ultimately though, ‘Girls Trip’ is by far one of the funniest, wildest, more heartfelt comedies the year has produced, managing to earn respect in its ability to be both shocking and genuinely hilarious without reducing its leading ladies to a stereotype or punch-line.