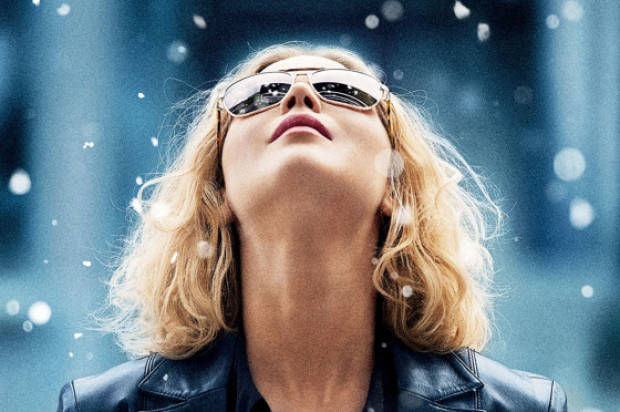 Harkening back slightly to the off-kilter style he injected into earlier projects like ‘I Heart Huckabees’ and ‘Flirting With Disaster’, David O. Russell’s ‘Joy’ is an artificial jumble of a movie that survives purely on the magnetic presence of his leading lady – frequent collaborator Jennifer Lawrence (‘Silver Linings Playbook’, ‘American Hustle’). Despite this biopic basing itself in reality Russell’s vision is considerably exaggerated, with the opening moments of soap opera veteran Susan Lucci participating in a faux TV drama – something Russell frequently cuts away to – setting the environment.

Not that one would know from the uninformative trailers, ‘Joy’ centres on Joy Mangano the inventor of the Miracle Mop who juggled life as a divorced mother of two amongst the adversity and meddling of her unsupportive family to build her own business dynasty. It’s a rags-to-riches tale we’ve seen countless times but, to hand it to Russell, we haven’t seen it quite like this before. It’s a rather cold-feeling story overall with the film seemingly going out of its way to make everyone surrounding Joy as unlikeable as possible, perhaps in a bid to make her rise that much more inspiring; the exceptions being Diane Ladd as Joy’s overly-supportive grandmother, and Edgar Ramirez, delivering the film’s one natural performance, as her ex-husband.

As to be expected Lawrence is electric, and the likeability of the actress herself no doubt aids her, but she is far too young to play the middle-aged Mangano, and the “bigness” of her performance, whilst fitting with the film’s tone, detracts us slightly from the character becoming a more personable creation. Robert DeNiro, Isabella Rossellini, Virginia Madsen and Bradley Cooper all similarly deliver over-the-top performances as Joy’s father, Joy’s father’s girlfriend and initial investor, Joy’s house-ridden mother, and the head of the shopping network that gives the Miracle Mop its debut respectively.

In his attempt to skewer the Hollywood biopic by making ‘Joy’ superficial and melodramatic, Russell has at least delivered a film that’s unique yet ironically unremarkable and unmemorable. The love the general public harbour for Lawrence will serve the film well for initial curiosity but I imagine audiences will leave ‘Joy’ feeling confused, empty and, well, joy-less.