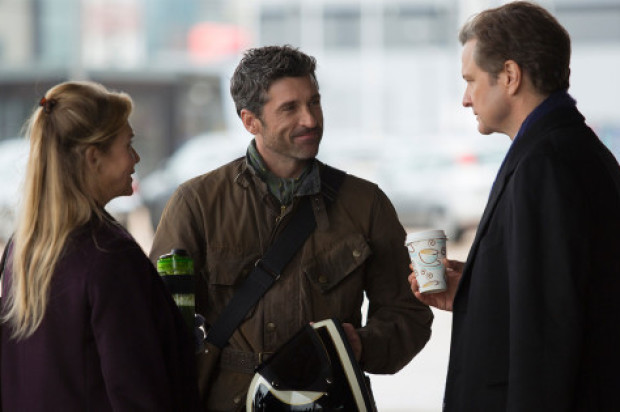 As one could easily argue that ‘Bridget Jones’s Baby’ is a sequel arriving a few years too late, and given that the first sequel – 2004’s ‘Edge of Reason’ – played to a critically underwhelming reception, you’d be forgiven for expecting much of the hum-drum same for this final outing. Thankfully (more so for the devoted Bridget Jones fans than the casual filmgoer) this threequel is a charming slice of comedic delight that reaffirms just why we fell in love with the character in the first place.

Under assured direction from Sharon Maguire (who helmed the original ‘Bridget Jones’s Diary’ in 2001) working off a colourful script from creator Helen Fielding, Dan Mazer and Emma Thompson, ‘Bridget Jones’s Baby’ is a suitably hilarious outing that adopts its humour from a welcome blend of the slapstick and the situational variety.

Whilst it’s clear the film banks on the nostalgic it refuses to simply rehash gags that made the original film so memorable, so when we open on a sad, lonesome Bridget (Renee Zellweger) blowing out a candle on her birthday-for-one dessert as the familiar chords of “All By Myself” chime in the background, it’s a welcome joke when she so assuredly tells the song to “F**k off” and changes it to Kris Kross’s “Jump”, resulting in a particularly amusing lip-synched performance around her compressed London flat.

Though the once-plump Bridget has reached her goal weight, she’s still romantically challenged, and the film catches us up to speed rather quickly in regards to the whereabouts of the two major players in her (former) love life; the oft-morose barrister Mark Darcy (Colin Firth) is now married to another woman, and playboy Daniel Cleaver (Hugh Grant) is, well, out of the picture – to put it mildly. As we already know though Mark isn’t far from Bridget’s affections, or her privates for that matter, and the overlap of a spontaneous one night together with the drunken romp she shared with the deliriously charming Jack Qwant (Patrick Dempsey), a millionaire mogul who has amassed his fortune from his matchmaking website, results in a surprise pregnancy. But just who is the father?

That’s the question the film refuses to answer until its satisfactory conclusion, and although we all want Bridget to find her happy ever after with Mark, the film paints Dempsey’s dreamy Jack as a perfectly acceptable option that should Mark lose Bridget to anyone, it might as well be to someone like Jack. The handling of both characters serving as a potential father is also managed with aplomb with Mark’s conservatism providing ample fodder for the more laidback Jack to toy with; the two men accompanying Bridget to her birthing class naturally results in Jack and Mark being mistaken as a gay couple, something Jack delights in far more than Mark.

The horde of loveable characters we’ve come to know are all back in some capacity – Sally Phillips’s foul-mouthed Sharon, and Gemma Jones and Jim Broadbent as Bridget’s parents, amongst others – and new recruits in Sarah Solemani as Bridget’s overly-confident work colleague and Emma Thompson as Bridget’s gynaecologist (who delivers perhaps the film’s grandest line in the moments leading up to the birth) prove as stand-out additions, but it ultimately comes down to (unsurprisingly) Zellweger as Bridget herself. Much has been made of the actress’s appearance in the lead-up to the film’s release, and though she doesn’t perhaps have the exact same aesthetic as before, she still owns the character and embodies her like it’s a second skin.

It may have taken 12 years for Bridget to return but this film is ample proof that some things are worth waiting for. Funny, warm and oh-so-charming, ‘Bridget Jones’s Baby’ is a more-than-satisfactory conclusion to the unlikeliest of cinematic sagas.