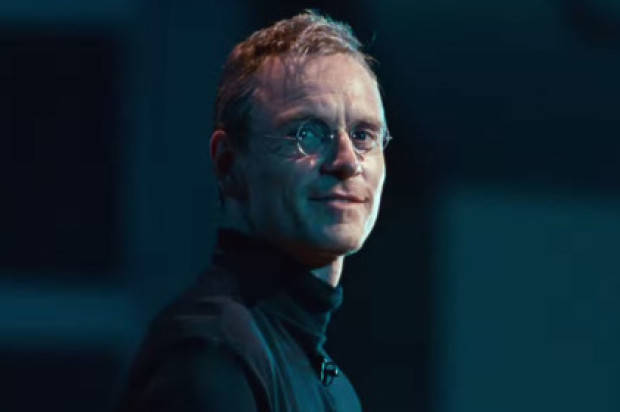 It really goes without saying that Steve Jobs will remain one of the most important figures of the modern world. The products he so masterfully pioneered have become a near-staple in our society with his various forms of iPhone’s, iPod’s, iMac’s and iPad’s taking on a near-life form of their own, and I dare wager that if reading this review, it’s potentially on one of the aforementioned devices . The man himself screams biographical potential so it’s just as well that the power-play duo of director Danny Boyle (‘Trainspotting’, ‘Slumdog Millionaire’) and writer Aaron Sorkin (TV’s ‘The West Wing’, ‘The Social Network’) have fused together to give us, the rather fittingly titled, ‘Steve Jobs’; let’s just pretend the Ashton Kutcher vehicle never happened ok?

A rather unconventional look at the brilliant but highly flawed Jobs, the film’s rapid-fire dialogue and three-scene structure present an almost stage-show production mentality as Boyle breaks down the figure to a trio of key product launches that help us (only slightly) gage the kind of man he was. In a truly magnetic turn Michael Fassbender wholeheartedly embodies Jobs in the kind of performance that absorbs Jobs’ essence rather than creating a caricature. It’s easy to argue that Fassbender doesn’t resemble Jobs in his features but that’s not what this performance is about, it’s near Shakespearean in its grounded theatricality and it isn’t hard to see why he has been rewarded throughout the awards season.

It’s common knowledge at this point as to the type of man Steve was, and though highly imperfect and perhaps a bit too cocky for his own good, the portrait painted here is of a man incredibly driven as opposed to the demonic figure that very easily could’ve been birthed from Sorkin’s pen. Jobs was someone unable to concede defeat and his determination is none more present than it is in the film’s opening at the 1984 Apple Macintosh launch before concluding with the 1998 unveiling of the iMac; the doomed-to-fail “experiment” that was 1988’s NeXT, a company Steve founded, occupies the film’s midsection. As frustrating as it can be to watch Steve nearly belittle those that work around him, Sorkin softens him with one of the film’s most interesting aspects – the relationship with his daughter. Initially refusing to accept her as his own, Steve isn’t so much harbouring malice towards her as he is struggling with the existence of someone he has to take responsibility for despite never asking for it.

Fronted by such a complex performance from Fassbender, electric words from Sorkin, and supported by a dynamic set of players including Jeff Daniels (as Apple CEO John Sculley), Kate Winslet (as marketing executive, and Steve’s one and only confidante, Joanna Hoffman), Seth Rogen (as Apple co-founder Steve Wozniak) and Sarah Snook (as a launch manager for the Macintosh and iMac presentations), it’s easy to overlook the technical aspects director Boyle has infused in this incredibly absorbing film. The music and filming choices he has made to help make each era their own distinguishing feature is quite remarkable with the 1984 set-piece filmed in gritty 16mm (complete with an electronic score), a more crisp 35mm for the 1988 segment, before finishing on digital film for the 1998 finale, beautifully underscored with a more symphonic soundtrack. It’s a subtle choice but effective all the same.

‘Steve Jobs’ certainly won’t be a film for all audiences as the distinct structure adopted here may turn viewers off with its refusal to play like a traditional biopic, but I honestly thought this approach was novel and a more fascinating way to present a figure whose complications only make him more interesting.