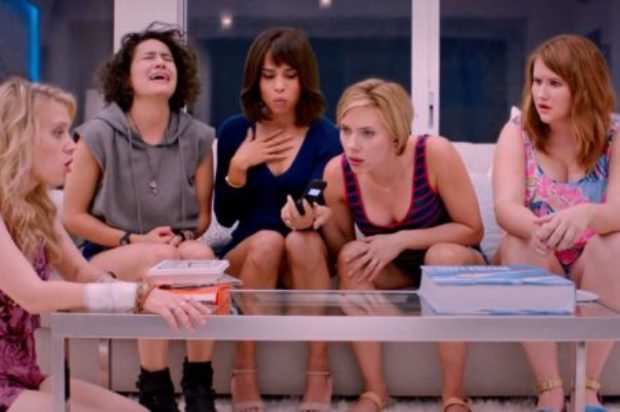 After the success of such female-centric fare as ‘Bridesmaids’ and ‘Bad Moms’, you would think that the argument of “women-fronted features can’t be as successful as their male counterparts” would be laid to rest. Despite the profitable returns on those titles (the former even earning two Academy Award nominations) it’s been the television screens that have paved the way more so for women to showcase their humorous talents, both in front and behind the camera, which is why we need something like ‘Rough Night’, even if it isn’t as committed to its nasty premise as it should be.

Director Lucia Aniello (making her feature debut after primarily working on the TV series ‘Broad City’) has assembled an impressive quintet of talent to front her dark comedy, which could generically be described as a female take on ‘The Hangover’ meets ‘Weekend at Bernie’s’; Peter Berg’s underrated, and supremely nasty, ‘Very Bad Things’ correctly feels more like the inspiration though. The initial premise is simple: a group of college friends reunite for a bachelorette weekend in Miami where bride-to-be Jess (Scarlett Johansson) teeters between having an early night and considerably letting loose; the latter mentality wins when a hefty amount of cocaine is purchased.

With her Hilary Clinton-esque hair and conservative attitude (a far cry from the figure the film opens with at a college beer pong event set 10 years prior) Jess is worried that this weekend will damage her political campaign, which is all the more reason why her crew – Alice (a scene-stealing Jillian Bell), lesbian activist Frankie (Ilana Glazer), Frankie’s former girlfriend and now separated single mother Blair (Zoe Kravitz), and outsider Pippa (Kate McKinnon), a friend she made whilst studying abroad in Australia – are determined to considerably loosen her up.

As the film quickly establishes itself as a “girls can behave badly too” type affair, ‘Rough Night’ introduces the one plot point that steers the remainder of the film towards darker territory, and it’s here that we feel a sense of filmmaker freedom stifled by studio restrictions. A suitably attractive and well physiqued young man (Ryan Cooper) comes to the door, and although he appears far too menacing to be the stripper Frankie has organised, his aesthetics and compliance to perform for Jess have them believe he is their entertainment for the night. Without going into details, it isn’t long before an accident leaves the poor man dead, and it’s here where the film temporarily halts its comedy pedal leaving audiences to wonder if ‘Rough Night’ will re-energise itself; Bell’s decision on how to get rid of all the cocaine answers that question swiftly.

The set-up that these five innocent (for the most part) women have to work out a plan to dispose of a body without being caught is ripe with possibilities, and given the boldness of Aniello’s work on ‘Broad City’ you could imagine ‘Rough Night’ having a field day on just how debaucherous a road to travel down. Sadly, that particular aspect of situational comedy feels all too safe and the climactic moments involving the girls (and a well-tanned Colton Haynes as the actual stripper) reeks of studio involvement; similarly, the inclusion of Ty Burrell and Demi Moore as an over-sexed couple with a penchant for swinging fizzles out after a promising introduction.

For all of ‘Rough Night’s downfalls though, it’s the chemistry between the five leads that constantly remains the film’s winning feature. Johansson, who has only truly been given the chance to stretch her comedic muscle when guest-hosting the sketch program ‘Saturday Night Live’, is as engaging as expected, and she injects just enough subtle comedic beats to allow her character not to suffer from being the straight player amongst her more seasoned genre peers. Bell, so often relegated to side-player status, is truly the film’s MVP (not an easy task with a firecracker like McKinnon on hand) and she manages to truly let loose without showboating; her greatest skill proving the slightest reaction shots or her ability to deliver a simplistic line with conviction and vigour – a piece of dialogue involving her difficulty at watching ‘Orange is the New Black’ being a prime example of something made funnier purely by her inflection.

Glazer is essentially playing an extension of her semi-slacker personality from ‘Broad City’, and Kravitz, similarly playing it down alongside Johansson, guides her own comedic styles to her strength when needed, leaving McKinnon to balance their manageable with her maniacal ways; her main source of comedy here deriving from the fact that her character is Australian, and although the accent is supremely ridiculous, she commits 100%.

‘Rough Night’ isn’t going to be the film that smashes the glass ceiling when it comes to female-led studio productions, nor will it be the most memorable, but in a year where comedy outings have been few and far between it certainly stands as one of the better outings, even if it doesn’t fully commit to itself.