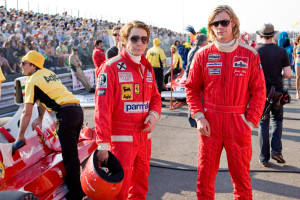 With Chris Hemsworth’s mug plastered all over the advertising designs and the trailers making it out to be some super-charged Formula One rival film, you’d be forgiven for having preconceived notions as to what Ron Howard’s biopic is exactly about.  Not only is ‘Rush’ an exciting feature driven by its characters more than the vehicles they celebrate, it features two complex players both determined to become champion of the Formula One world – James Hunt (Hemsworth) and Niki Lauda (Daniel Bruhl).

It’s the 1970’s and Hunt and Lauda are the bitterest of rivals.  Hunt is the quintessential charmer, constantly winning the public and the media over with his playboy allure and cocky appeal, whilst Lauda is more withdrawn, calculating each move and outlining every course he can to overtake him.  With their opposing lifestyles, not to mention attitude towards racing, it’s an interesting dynamic to watch as the intensity between the two boils, especially as over the course of the proceedings there’s never really a clarity on who the hero will be.

Not being an enthusiast of Formula One racing, I found one of the strongest assets of ‘Rush’ was its ability to make the sport genuinely thrilling.  Whether it be the close up shots of tires speeding along the raceway, the crackling audio of revved up engines, or the terror that comes from witnessing these vehicles colliding with one another, Howard presents the sport in an honest and respectable way all the while still maintaining his focus on the drama between the two drivers.  Similarly the script from Peter Morgan (‘The Last King of Scotland’) delivers an even balance between Hunt and Lauda, never painting either one as protagonist or antagonist but a combination of both as they each possess traits that appear strangely relatable.  Admittedly Lauda’s character frustrated me as his stubbornness verged on infuriation for much of the films lengthy running time (123 minutes) but you always understand where he comes from.

What ultimately drives ‘Rush’ though are the performances, and as much as the aforementioned Lauda grated on me it’s through no fault of Bruhl who is nothing short of phenomenal here.  The Spanish born, German speaking actor hasn’t had many opportunities to showcase his talents outside of European cinema (save for namely ‘Inglorious Basterds’ and ‘The Bourne Ultimatum’) but with this and the upcoming Julian Assange biopic ‘The Fifth Estate’ it’s very possible we are seeing the birth of one of the next major players in the industry.  And then there’s Hemsworth who officially becomes a movie star with his turn as Hunt as he takes the kind of character who, on paper, should be someone we despise yet he injects such charm and vulnerability into the role that he walks away with it with such ease.  The women in their lives are given less to do unfortunately but their limited focus doesn’t stifle the performances of Alexandra Maria Lara (as Lauda’s wife Marlene) and Olivia Wilde (as Hunt’s suffering wife Suzy).

Whilst the film is occasionally emotionally manipulative, as well as succumbing to a few clichés of the sports movie genre, there’s no denying how well made a film ‘Rush’ is.  Ron Howard easily weaves his way through the material and the sleek sexiness of the decade, and whether you know about the history involving Hunt and Lauda or not, it’s an exhilarating experience steered to the finish line by two outstanding performances from Hemsworth and Bruhl.