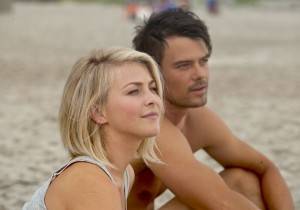 Returning to the Nicholas Sparks pool after adapting ‘Dear John’ for the big screen a few years ago, director Lasse Hallstrom was no doubt hoping his relatively acclaimed name and the fact that ‘Safe Haven’ has a “thriller” element (a genre term used lightly in this case) would be enough to satisfy the masses.  After ‘The Notebook’ became a breakout hit, the Nicholas Sparks catalogue soon became a hotbed of activity for filmmakers hoping to recreate the success that was the romance of Ryan Gosling and Rachel McAdams, but sadly none have availed.  After the aforementioned ‘Dear John’ turned a healthy profit we saw ‘The Last Song’ and ‘The Lucky One’ unleashed on an unsuspecting public who inexplicably rewarded each film financially despite the critics advising otherwise.

Hyped as a departure from the author’s usual shtick, ‘Safe Haven’, despite its tame ‘Sleeping with the Enemy’-esque story arc, is still very much playing to the Nicholas Sparks convention; idealized romantic stereotypes falling for each other in a small, sleepy town.  This time around it’s Josh Duhamel as a particularly saintly widowed father of two who falls for new girl in town Julianne Hough, who we learn from the opening credit sequence is on the run from what appears to be a crime committed in self-defence.  Hoping for a brand new start in the small community town that is Southport (which despite its apparent picturesque setting appears to be a more appropriate locale for a slasher flick) Hough’s Katie scores a job and a residence in record time as well as an instant best friend in the form of Cobie Smulders.  Add to that an inevitable romance with our hunky widower Alex (Duhamel) and you have yourself all the ingredients for a lifetime TV movie that this film is ultimately no better than.  A real shame when you consider that director Hallstrom has such quality outings as ‘Chocolat’, ‘What’s Eating Gilbert Grape’ and ‘The Cider House Rules’ on his resume.

As we sit and watch Duhamel and Hough fall in love with each other (and I have to note the profession of love from Duhamel is beyond pathetic in its thrown-away simplicity) the film hints at something darker regarding Katie’s past but doesn’t get properly into it until about the hour mark and even then once they finally reveal what she’s running from it’s so ridiculously simple that you can’t even muster up an ounce of interest.  Without giving too much away it involves a constantly sweaty, crazed cop (David Lyons) whose pursuit of Katie culminates around a 4th of July fireworks display-come-house fire that lacks any genuine tension, and is so clichéd that you’ll be sitting there in amazement at how wholly unoriginal everything that’s unfolding in front of your eyes is.  Amazingly though this isn’t the worst part as ‘Safe Haven’ saves the real shocker for the tail ends of this putrid passion tale.  In a “twist” that is so unintentionally hilarious, the film escalates from being bland to ridiculous in a matter of seconds, making everything you just witnessed seem like the ultimate betrayal in subtle storytelling.

Being a fan of ‘The Notebook’, and not entirely disliking ‘Dear John’, I am more than open to these types of films and more often than not I can forgive a lot of shortcomings if there’s at least one redeeming feature but I was reaching when it came to ‘Safe Haven’.  Hough and Duhamel are likeable enough actors but the script was not their friend, and sadly they weren’t able to rise above the cardboard cut-outs that were their characters.  Smartly opening in time for Valentine’s Day, I urge even the strongest fans of schmaltzy cinema to bypass this haven and go watch ‘The Notebook’ again instead.