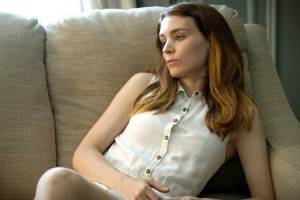 A brief synopsis of ‘Side Effects’ would read something like this:

After spending four years in prison for insider trading, a man comes home to his elated wife with the intention of starting up their lives again.  It’s clear though that his wife is suffering from some form of depression and, in an effort to alleviate her symptoms, she starts taking a new drug that only worsens her dark situation.

It’s pretty standard by-the-books thriller stuff and one that could be made into a decent film, but give that treatment to a filmmaker like Steven Soderbergh and you should forget having any stock you have on the synopsis and be prepared for something unique that promises to travel in one direction only to ultimately bypass its destination and culminate somewhere else entirely.  Perhaps best described as a psychosexual, pharmaceutical thriller, ‘Side Effects’ begins with the reunion of Emily Taylor (Rooney Mara) and her recently incarcerated husband Martin (Channing Tatum), finally back together after his stint in jail for insider trading.  Initially it appears as if their attempt to normalise their life is a success but it’s evident that all is not well with Emily: depression has gripped her – as it has before – and she’s unsure how to cope with it.  One day she finds herself driving straight into a wall, and I mean that in the most literal sense, and she’s unsure if it was an intentional act or not, something that alarms her doctor, Johnathan Banks (Jude Law).

With an endless supply of medication at the ready Banks takes on Emily as his patient, much to the dismay of his relatively suspicious wife (Vinessa Shaw), and in the early stages of their arranged meetings Emily appears to trust him and her condition improves.  After meeting with Victoria Seibert (Catherine Zeta-Jones, slinky as usual), Emily’s former psychiatrist, Banks readies the drug Ablixia hoping it will perform the desired effect on Emily and finally cure her of her despair.  Initially a success, side effects start to reveal themselves and the results are particularly lethal for Emily and her husband.  As is the case with all good thrillers the less known the better, and so that’s all that should be revealed regarding the unveiling of the plot as the real entertainment here lies with watching this intense thriller expose itself.

Soderbergh, who has touted this film as his cinematic swan song, has always defied convention when it comes to storytelling so it’s no surprise that a supposed anti-pharmaceutical screed is anything but.  Reuniting with his ‘Contagion’ screenwriter Scott Z. Burns, there’s an almost Hitchcockian feel to the way Soderbergh reveals the true nature of ‘Side Effects’ with it starting as a drama dealing with a woman’s inability to cope with her everyday life before masquerading as a “framed man trying to prove his innocence” type thriller to finally backhanding you with a finale that has no less than three twists at the ready.  Any other director might get carried away and the underlying melodrama of it all could take over leading it to escalate to something far more silly, but thankfully Soderbergh has control.  It also helps he’s working with a finely tuned cast who all deliver solid work.

Mara, in her first major role since breaking out in the US remake of ‘The Girl with the Dragon Tattoo’, continues her penchant for playing dark, damaged women, effortlessly shifting from innocent wide eyed girl to icy femme fatale in so much as one look.  Zeta-Jones has less to work with for the majority of the running time, but it’s clear she’s a character we need to keep our eye on, and she appears to be having a great time playing up her seduction factor.  Law gets perhaps the most complex role as Dr. Banks and as his characters mental state slowly unravels in piecing together the puzzle that is Emily, he handles it with utter charm and conviction.  And as for Tatum, well he seems to be more stunt casting than anything else as he has very little to do, but he’ll get a few extra behinds in seats and his role only requires him to play nice and look handsome – so in that respect he’s a success.

Whilst the film itself isn’t “classic Soderbergh” it is stronger than the majority of other ventures out at the moment, and if this is indeed his last final hurrah on the big screen, he’s going out in style – twisted, convoluted, style.

My rating 3.5/5 (A perfect prescription for entertainment)