Archbishop of Boston EXPOSE investigate THE BOSTON GLOBE by Caroline Russo | on January 26, 2016 | 0 comments | in Film Release & Reviews | Like it 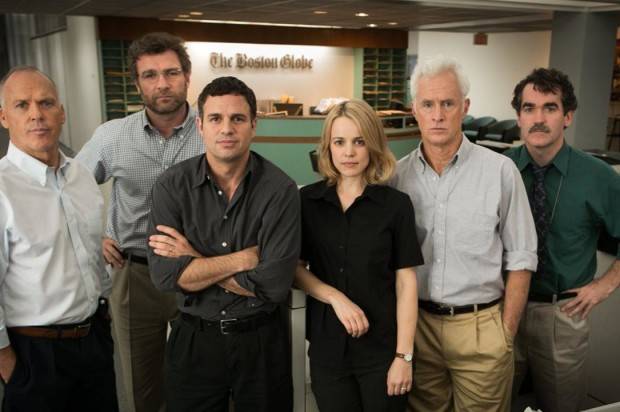 Don’t hold the fact that ‘Spotlight’ writer/director Tom McCarthy’s last major credit was the abysmally received (and barely seen) Adam Sandler vehicle ‘The Cobbler’ as this hard-hitting drama is sure to stand as one of this year’s best productions. Playing an ambitious journalist on the television series ‘The Wire’ clearly paid off for McCarthy as ‘Spotlight’ stands as one of the great films detailing journalism and all its aspects. The film is more than just a respectful nod to the dying art of print though – it’s amazing how this feels quite like a sort of period piece despite only being set in 2001 – as the scandal the titular team investigate is one that’s almost too monstrous to be true.

In 2001 the “Spotlight” team, a group of inspective journalists working as a subsect of The Boston Globe whose new stories could take up to a year to publish due to their intense research methods, were appointed by editor Marty Baron (Liev Schreiber) to investigate a story regarding a paedophilic priest and the terrifying notion that the Archbishop of Boston was aware of this sexual abuse and did nothing to stop it. Under the guidance of team leader Walter “Robby” Robinson (Michael Keaton) the “Spotlight” crew, through all their tenacity, slowly unveil a horrifying pattern of sexual abuse within the Catholic Church, made all the more impactful by its subsequent cover-up by the Boston Archdiocese. Exactly how intense these cover-ups were is best left for the viewer to discover as a lot of ‘Spotlight’s impact is born from the sheer scale of the sex abuse cases they expose.

As sharply written as the film is, ‘Spotlight’ is ultimately an actor’s showcase and the ensemble presented here features a slew of actors who fail to skip a beat between them. Keaton, Schreiber, Rachel McAdams, Mark Ruffalo, Stanley Tucci and Bryan D’Arcy James (in the kind of role that should put him on the radar) are all so in tune with their characters, and each other, that it’s like watching professional sportsmen ace their craft. Keaton, McAdams, Ruffalo and James perhaps emerge with the showier roles – Ruffalo in particular gets an “Oscar” moment as he voices his outrage – though there isn’t a clear protagonist amongst them as the film succeeds as truly being an ensemble feature.

As the film informs us in its pre-credit closer, abuse and cover-ups continue to this day within the Catholic Church and, sadly, the stellar work from the “Spotlight” team seemed to only momentarily cease a sickening monster that has spread worldwide. The need to inform and the ability to entertain prove a winning combination for this essential film which delivers on all accounts and demands audience attention.