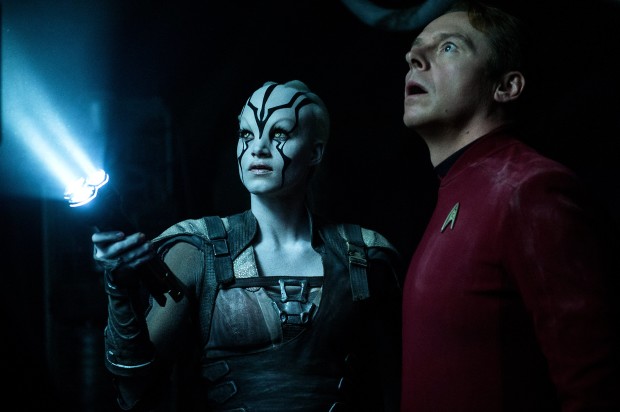 It seems far too often an occurrence that the action blockbuster – especially one contained within a franchise – fills itself plentiful of spectacle to the detriment of character development and a serviceable plot.  And with ‘Star Trek Beyond’ one could safely assume this trend would be maintained given its director shift from J.J. Abrams to Justin Lin (who helmed the 3rd, 4th, 5th and 6th ‘Fast & Furious’ films), not to mention its release is coming off the back-end of action-heavy trailers.  So what a welcome surprise this threequel comes to be as it not only delivers on the visual front but provides a welcome dose of humour and depth.

Opening with a rather amusing sequence that presents the USS Enterprise with a less-than-menacing foe, the ship’s crew are in something of an existential crisis with Captain James T. Kirk (Chris Pine) questioning his place amongst the federation, and Commander Spock (Zachary Quinto) coming to terms with his relationship with communications officer Uhura (Zoe Saldana).  Deep and meaningful as these situations are, ‘Beyond’ doesn’t waste time in moving itself forward as the Enterprise falls under attack from a powerful new enemy during a search and rescue mission for a lost ship.  As the Enterprise is literally ripped apart and the majority of the crew are slain in the process, the remaining survivors are all stranded separately on a remote planet where their universal goal is to keep the villainous Krall (an unrecognisable Idris Elba) from destroying millions of innocent lives through the assistance of a powerful artefact, which just so happens to be in the possession of Kirk’s crew.

Though the script from Doug Jung and Simon Pegg (who plays the always amusing chief engineer Scotty) separates the crew into unlikely pairings for the majority of the film’s mid-section – Spock and medical officer Bones (Karl Urban) are forced to work together, whilst Uhura is unfortunately paired with Krall – the idea of working together in unity under the hardest of obstacles remains firm. It helps that ‘Beyond’ once again utilises its cast to the best of their abilities, and at three films deep into this new cinematic universe it would only make sense. Pine, Quinto, Urban, Pegg and Saldana are all effortlessly comfortable in their respective roles, whilst John Cho as helmsman Sulu and the late Anton Yelchin (to which the film acknowledges his passing in the credits) as navigator Chekov follow suit; and it would seem all the “controversy” surrounding Sulu’s sexual orientation was for naught as his character’s homosexual reveal is beautifully understated and hardly even worth raising an eyebrow at. In terms of ‘Beyond’s newest additions, Elba makes for a formidable villain, one whose eventual backstory adds a certain layer of tragedy to his plight, and Sofia Boutella (who made such an impression as the blade-legged assassin in last year’s ‘Kingsman’) potentially sets herself up as the next Star Fleet recruit as an unlikely alien scavenger who aligns herself early with Scotty.

Not nearly as front-loaded with action as one might expect, given Lin’s past directing Vin Diesel at the steering wheel of whichever automatic property is the hottest on the market, ‘Star Trek Beyond’ balances its spectacle quota with elements of drama and comedy in equal measure and proves a worthy continuation of the series Abrams so masterfully revamped.