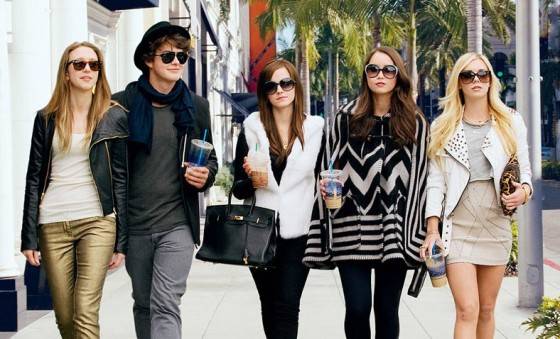 Without making ‘The Bling Ring’ sound more profound than it is, it really is a film of our time.  Reality TV and social media has given birth to a generation of celebrities that are famous for no particular reason, with the likes of Paris Hilton and Kim Kardashian being the more prominent names of “stars” who, with a complete lack of talent, have built empires off their names alone.  So it’s not out of the realms of possibility that these so-called talents would have a hoard of followers that are equally as vacuous and obsessed with fame.

Based on a Vanity Fair article (‘The Suspects Wore Louboutins’ by Nancy Jo Sales) which detailed the burglaries of several celebrity homes in the Hollywood Hills by a series of fame-obsessed teenagers, ‘The Bling Ring’ doesn’t ask us to sympathise with these brats, it moreso paints a picture of the privileged lives of kids who are as naïve as they are stupid, to put it delicately.  The group of teens here aren’t all that different from Hilton and her kind with them frequenting the same clubs, living in the same neighbourhood and moving in the same celebrity circles, and when it comes to them actually breaking into one of their idol’s homes (with Lindsay Lohan, Megan Fox, Rachel Bilson and Orlando Bloom amongst the victims) it’s never seen as an attempt to quickly score some cash off luxury items but more to crawl into this celebrity skin and live their lifestyle for one night.

For a film dealing with the obsession of fame, it seems only fitting that Sofia Coppola take this story on board with the majority of her filmography being about the subject in one context or the other; ‘Lost In Translation’ and ‘Somewhere’ examined the surreal, often tedious lifestyles of movie stars, whilst ‘Marie Antoinette’ did essentially the same thing in the guise of a historical biopic.  ‘The Bling Ring’ is far from being her best, or most sophisticated, work but she’s the right person for the job, electing to shoot the film in a semi-documentary style which appears to be beneficiary to our perception of these characters.  As for the characters the majority of the cast are unknown, which also helps feed the realism the movie is playing off.  Katie Chang and Israel Broussard as ringleader Rebecca Ahn and her unwilling accomplice Marc Hall are the initial focus, and both very good, before Emma Watson’s aspiring model Nikki Moore becomes the main attraction.  Watson’s casting may be slightly on the stunt side but there’s no denying the girl can act with her valley girl mannerisms and voice perfected to a tee.  We’ve seen her play the brains in the ‘Harry Potter’ series and evidently she can do brainless just as well, somehow managing to turn a line like “Your butt looks awesome” into a deep revelation of her character.  Apart from Watson, the only other notable names on board are Gavin Rossdale as a sleazy club manager and Leslie Mann as Watson’s home-schooling mother who bases her teachings off of ‘The Secret’.

As for the robberies, undoubtedly they are the best part of the film if not purely just to see how extreme a lifestyle these celebrities live.  Somehow Coppola managed to convince Hilton to allow them to film in her home and it truly delivers a jaw-dropping view on vanity and excess living, with the interior of her home being plastered in pictures of herself, even having pillow cases embossed with her own face.  Like the film itself it’s a maddening glimpse into a pitiful depiction of fame our culture has seemingly become obsessed with.  Though there isn’t really a whole lot to ‘The Bling Ring’, it’s unsurprisingly quite a shallow film, it’s still an entertaining and well-crafted look into a world that we may believe to be glamorous but ultimately appears sad.

‘The Bling Ring’ is playing exclusively at Palace Centro