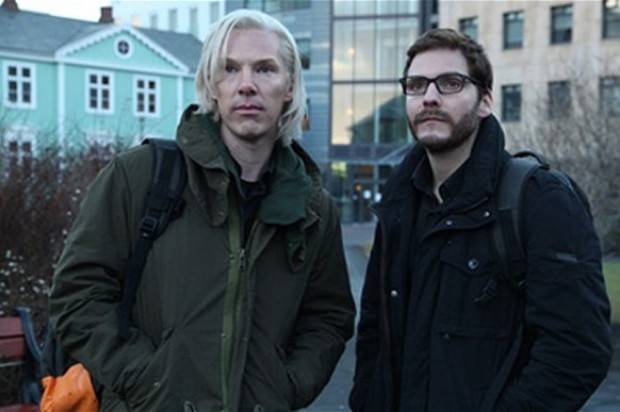 CINEMA RELEASE: THE FIFTH ESTATE
Release date: 14th November 2013
Director: Bill Condon
Cast: Benedict Cumberbatch, Daniel Bruhl, Laura Linney, Anthony Mackie, Stanley Tucci
Classification: M (Violence and Coarse Language)
Review by Peter Gray
It goes without saying that Julian Assange is one of the more fascinating and puzzling figures of the last few years, and a straight-forward biopic about him feels like something that should be made. So it comes as rather unfortunate that ‘The Fifth Estate’ is not that film. Particularly user-friendly, the film does at least get some credit for taking an exceedingly complicated story and boiling it down to a surprisingly easy-to-follow saga, with a commendable turn from Benedict Cumberbatch as the enigmatic Assange, but overall it can’t help but feel like it falls short on its potential.
Detailing the growth of the Wiki-Leaks website under founder/editor-in-chief Assange and spokesperson Daniel Domscheit-Berg (Daniel Bruhl) through to the eventual publication of an immense amount of confidential data leaked by troubled soldier Bradley Manning (a plot point and figure both heavily skimmed over here) ‘The Fifth Estate’ has all the right ingredients for a conventional thriller, it just doesn’t know how to fuse them correctly. One of the biggest misfires the film suffers is in its handling of Assange, as by the end credits he still remains just as much as a mystery as when the film started. This isn’t for a lack of trying though as Cumberbatch gives his all to the role and perfectly captures the real Assange’s mannerisms, but beyond that there doesn’t appear to be much to work with as director Bill Condon only reveals sparse amounts of Assange’s personality; the much-talked about sexual charges against him are very briefly referred to, and there’s next to nothing in terms of Assange’s upbringing mentioned apart from his involvement in an Australian cult known as ‘The Family’.
The film also can’t help but feel flavourless in terms of its visual style as the attempt to make the various scenes involving typing in chat-rooms exciting fails with superimposed typed messages displayed over stoic faces appearing supremely dated. Thankfully there’s an exciting story hidden away that your attention is kept just enough, but for a story like this just enough isn’t satisfactory. I’m sure we are still to see a great biopic about Assange, but until then the recent doco ‘We Steal Secrets’ will suffice as ‘The Fifth Estate’ isn’t as definitive as this subject deserves.
My rating 2/5 (Wiki is weak)