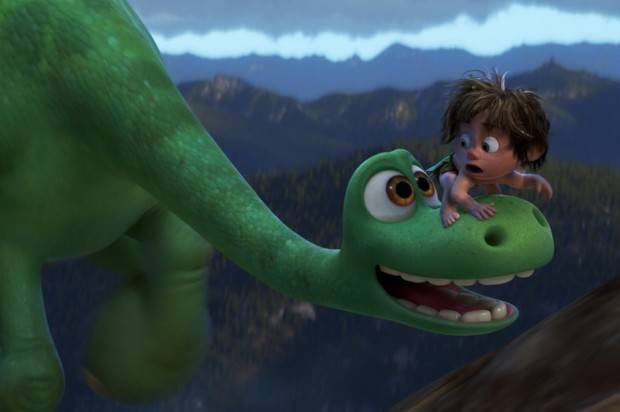 Though it’s unfair to compare Pixar’s latest adventure ‘The Good Dinosaur’ to their last effort, the masterful ‘Inside Out’, it’s hard not to feel underwhelmed here as we’re presented with a story that’s quite routine and predictable with the visuals serving up the only worthy praise. Pixar films don’t generally adhere to style over substance with the imagery usually only enhancing the story, not detracting from it, but with ‘The Good Dinosaur’ the look of the film is what ultimately saves it from disappointing mediocrity.

A coming-of-age type tale that slightly borrows its form from Disney’s ‘The Lion King’, ‘The Good Dinosaur’ centres on young Arlo (voiced by Raymond Ochoa), a timid Apatosaurus who’s the runt of his family and desperate to make a lasting impression on his family’s legacy like his brother and sister. Frightened at the most harmless of tasks – Arlo’s family are presented as farmers and ranchers here and so even feeding the chickens is too feared a job – he’s encouraged by his stern but tender Poppa (Jeffrey Wright) to “make his mark” on the world with something significant, so when he’s set the task of capturing the mischievous critter that has been stealing their food, it seems like the perfect opportunity. Naturally, this too proves a problem when said critter turns out to be a young caveboy, and Arlo not willing to kill him only fuels the fire that is his father’s disappointment.

In a sequence that is perhaps the closest to mimicking ‘The Lion King’, Arlo’s father is sadly struck down in an ill-timed storm that leaves the timid dinosaur stranded, helpless and particularly scared. Forced to go-it alone, his time travelling solo is short-lived when the caveboy – eventually dubbed “Spot” – joins him, and the unlikeliest of friendships is formed as they battle nature and ravenous animals, all the while harnessing the strength he wasn’t aware he possessed. It isn’t the most unexpected of plots, and there’s certainly nothing wrong with a predictable arc, but ‘The Good Dinosaur’ stumbles with a series of characters that do little to endear themselves to the audience. Arlo, for example, is too much of a pushover to really evoke much sympathy and the plethora of support players sadly all just bleed into each other, with the only stand-out being a monotone Styracosaurus whose woodland creature friends all act as various facets of his subconscious.

Though it meanders through with an uncomplicated story and less-than-memorable characters, ‘The Good Dinosaur’ does deserve credit for unleashing some of the most gorgeous visuals put to screen this year. The film’s realistic environment is so close to being actually realised it feels that you could reach out and practically touch it, and a joyous moment between Arlo and Spot set high amongst the clouded mountaintops is so lush that it momentarily reminds you of how spectacular Pixar are at their craft. Surprisingly grim at times, and strikingly beautiful at others, ‘The Good Dinosaur’ won’t be remembered as one of the studio’s finest, nor their worst, it’s simply a film that exists. It’s likely it’ll fill the quota for family entertainment this holiday season but be prepared for an adventure that’s lacking in humour and overdoes the sentimentality.