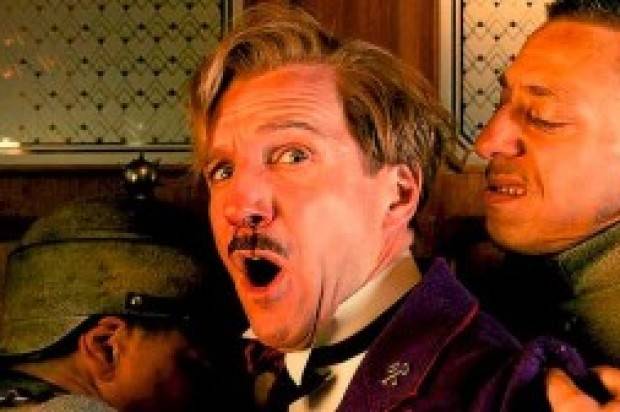 CINEMA RELEASE: THE GRAND BUDAPEST HOTEL
Release date: 10th April
Director: Wes Anderson
Cast: Ralph Fiennes, Adrien Brody, Tilda Swinton, Willem Dafoe, Bill Murray, Jude Law, Saoirse Ronan, Tony Revolori, Owen Wilson, Tom Wilkinson
Classification: M (Violence, Sexual References, Nudity and Coarse Language)
Review by Peter Gray
Despite re-teaming with a slew of his regular players (Owen Wilson, Bill Murray and Jason Schwartzman to name but a few) writer/director Wes Anderson may have found his ultimate protagonist in Ralph Fiennes in ‘The Grand Budapest Hotel’. An actor who rarely gets the chance to play anyone remotely heartwarming, Fiennes is so utterly charming and enchanting here that we can only hope he becomes a staple in Anderson’s career.
Unfolding as a story within a story within a story, ‘The Grand Budapest Hotel’ is, unsurprisingly, the prime location for Anderson’s quirky caper which tells of the legendary concierge Gustave H. (Fiennes) and how he came to be the prime suspect in a murder mystery. When we first enter the hotel though it’s the 1960’s, and The Grand Budapest sits atop the mountain heights of the fictional European city Zubrowka as a dilapidated shell of its former self. A curious writer (Jude Law) currently staying there strikes up a conversation with the mysterious Moustafa (F. Murray Abraham), and learns he is the current owner of the hotel, and a quiet dinner between the two segues into the 1930’s when The Grand Budapest was at its peak. There we learn that Gustave H. ran the establishment with a whimsical flare, and with his faithful lobby boy Zero (newcomer Tony Revolori) by his side, grooming him meticulously as his protégé, The Grand Budapest failed to reveal the most minor of flaws.
Adopting hints of the Marx Brothers, and perhaps even early Hitchcock, Anderson effortlessly weaves his own style throughout to create a comedy caper of sorts seemingly plucked from the 1930’s era it’s so gloriously stylized, when Gustave is implicated in the murder of Madame D. (Tilda Swinton, in alarmingly believable old-age make-up), a wealthy socialite who was just one of the frequent guests Gustave had the pleasure of seducing. With her evil son (Adrien Brody) and his sadistic henchman (a marvellously demented Willem Dafoe) intent on Gustave taking the fall for her demise, it’s up to Zero, and his lady love Agatha (Saoirse Ronan), a sweet bakery girl, to break him out of jail and prove his innocence. Whilst that does seem like a lot of plot to digest, and really that’s just the tip of the iceberg, ‘The Grand Budapest Hotel’ never feels like it’s over-indulging or attempting too much, and however ironic it may be that much of the plot takes place outside the hotel walls, there is so much joy to experience that you will want to re-visit as soon as the proceedings are wrapped up.
On a technical level the film is exquisite, with production designer Adam Stockhausen and cinematographer Robert Yeoman creating an almost storybook like world with exaggerated visuals that are painted in the most luxurious of colours. The score from Alexandre Desplat only adds to the impeccable overview, complementing the action in both the extravagant and more sombre moments. With Anderson’s script so perfectly intricate, not to mention profane (which leads to many a laugh-out-loud moment due to the screenplay offering flowing words of beauty interrupted by the occasional F-bomb), it’s not a surprise that his eccentric cast are all so seamlessly suited with the likes of Harvey Keitel, Jeff Goldblum and Edward Norton all appearing at various moments to deliver pitch-perfect performances. It really does come down to Fiennes though who is so flawlessly likeable that he manages to inject an air of familiarity to Gustave, even though the character himself is designed so that we know very little of him outside of his drill sergeant persona and penchant for older women.
Though there are moments of unexpected violence and cruelty, ‘The Grand Budapest Hotel’ stands as one of the most joyous experiences I’ve had in the cinema this year. Tackling feelings of loneliness and regret amongst a constant pace of light-heartedness and pure fun, Anderson’s outing is simply beautiful and however you respond to the twisted elegance he’s created here, I dare say you’ll want to re-visit ‘The Grand Budapest Hotel’ as soon as possible – I know I do.
My rating 5/5 (Check-in now)