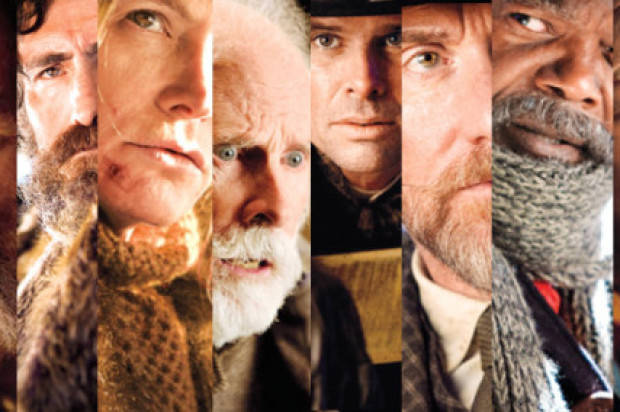 Quentin Tarantino has never been the type of director to display warmth on-screen but with ‘The Hateful Eight’, fittingly his 8th film, the filmmaker presents us with material that perhaps reigns as his nastiest yet. As to be expected though the morally-grey, violent and psychotic cast of characters Tarantino has assembled are a highly enjoyable bunch of degenerates, and through his unique dialogue and their brave performances, the 187 minute running time never feels like a chore.

Set some time after the Civil War in a blizzard-laced Wyoming, Tarantino is clearly in no rush to forward his relatively simple premise as we hone in on a horse-drawn carriage making its way through the chilly conditions on its way to Red Rock; inside sits bounty hunter John “The Hangman” Ruth (Kurt Russell) and his prisoner, Daisy Domergue (Jennifer Jason Leigh). Along the way they encounter Marquis Warren (Samuel L. Jackson), an ex-Union soldier, and former-confederate-turned-sheriff Chris Mannix (Walter Goggins). The tension has amounted considerably in their confined carriage by the time they find sanction in a local store – Minnie’s Haberdashery – and the plethora of colourful characters inside also seeking refuge do little to ease the current situation.

Tim Roth’s wonderfully over-the-top Englishman Oswaldo Mobray, Michael Madsen’s brooding cowboy Joe Gage, Demian Bichir’s sneaky Mexican Bob, and Bruce Dern’s chess-playing General Smithers round out the titular octet, all of these men clearly harbouring more than they let on, and as the blizzard strengthens outside, so too the prejudice between these eight awful people; the night predictably results in graphic bouts of bloodshed, but just who survives is less prophetic. Fending off the perils of nature found in the icy personality of the blizzard outside ironically appears like the safer option as guns are cocked, punches are thrown (quite often at the continually battered Leigh) and condiments poisoned as the suspicious crew turn on each other, culminating in the kind of (fittingly R18+ rated) blood-bathed finale that only Tarantino can somehow make a joyous experience.

As one would expect the casting here is close to perfection with his stock players – Jackson, Roth and Madsen – all suitably engaging; Jackson in particular appears to be having a ball, delighting in his characters masochistic tendencies. Russell and Goggins, both working under the director for the second time, are both marvellous, with Goggins easily pulling focus in every moment he’s involved, and Leigh, absolute trooper that she is, manages to inject both a sense of deviousness and sympathy into her uncontrollable character that it becomes almost immediately evident why she has been singled out in the award season race.

Though the aforementioned running time is never truly felt thanks to Tarantino’s engaging script and colourful palette, the film does take its time in building a sense of genuine tension with the second half of the film acting as the more visually arresting as opposed to the dialogue-heavy scenes that precede them. Ultimately it’s a minor criticism for the kind of film we’d expect to break the rules of conventionality, a profane Western that manages to entertain its willing audience with a slew of unlikeable characters.