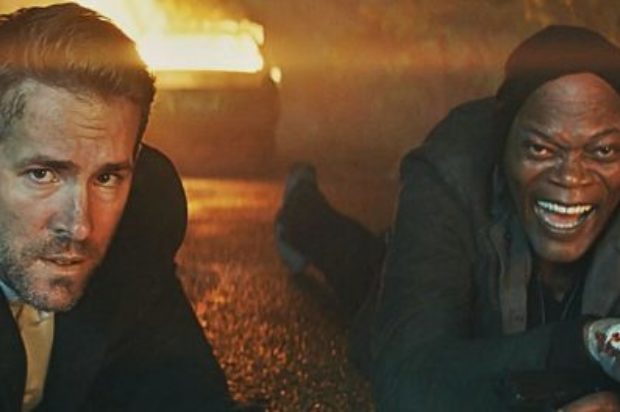 As generic and predictable ‘The Hitman’s Bodyguard’ proves to be from a plot point-of-view, it’s hard to deny the film’s overall appeal thanks to the winning double act that is Ryan Reynolds and Samuel L. Jackson. There’s nothing particularly fresh about the action sequences on hand, and the use of 1980’s love songs to soundtrack violent montages feels a little too ‘Deadpool’-esque (perhaps intentional, going off its casting), but the organic skills of both Reynolds and Jackson as comedians and action players keeps this guilty pleasure comfortably afloat.

Once a top-rated bodyguard for various important figures the world over, Michael Bryce (Reynolds) has been considerably demoted thanks to his failing to protect one of his clients; his dumbfounded look as he helplessly views his mark expire from the remnants of a sniper shot closing out the film’s confident opening credits. Seemingly losing his purpose to work, as well as his fed-up girlfriend (Elodie Yung) in the process, Bryce is coerced back into the protection game when he is asked to escort infamous assassin Darius Kincaid (Jackson) from London to the International Court of Justice in Amsterdam off the notion that Kincaid has substantial evidence in a case against brutal dictator Vladislav Dukhovich (Gary Oldman) that could prove the key to ending his terrifying reign.

Unsurprisingly, from here on out we’re treated to various fist fights, car chases, and barb swapping between Bryce and Kincaid who we quickly learn have a sordid history; I believe Bryce claims that Kincaid has tried to kill him 28 times. Much like fellow buddy actioners ‘Lethal Weapon’ and ‘Rush Hour’, ‘The Hitman’s Bodyguard’ relies on the chemistry of its mismatched leads, and whilst they’re hardly the industry partners Mel Gibson and Danny Glover were in the former, or adopted the fish-out-of-water mentality that Jackie Chan and Chris Tucker did in the latter, Reynolds and Jackson believably pain each other – both figuratively and literally – just as much as they agree to work together.

Having only the Australian thriller ‘Red Hill’ and the overblown threequel ‘Expendables 3’ to his name, director Patrick Hughes isn’t the most seasoned name to be in charge here, and there’s no flair displayed on-screen that makes him a signature name, but his evident ability in handling action and multiple movie stars on the aforementioned ‘Expendables’ film makes him a suitable fit for the carnage here; a hefty dollop of blood is shed throughout, quite often for comedic effort but nonetheless appropriately violent for the film’s harder classification.

As to be expected, ‘The Hitman’s Bodyguard’ exists simply to allow Reynolds and Jackson to go toe-to-toe and trade expletive-laced insults at each other, and when the result proves as amusing as they do, we can forgive the fact that Oldman is ultimately wasted in a generic villain role or that the alarmingly feisty Salma Hayek is unfairly sidelined as Jackson’s incarcerated wife after showcasing her finesse at being just as violent and offensive as her male counterparts in a role that deserves more moments to be explored.

‘The Hitman’s Bodyguard’ isn’t the type of film that will stay with you after you’ve seen it, nor is it a cinematic necessity as there’s nothing visually spectacular about it that calls for a theatrical experience, but it is an entertaining venture that knows how to utilise its strengths and let them do the talking for its 118 minute run time.