CINEMA RELEASE: THE HOBBIT: THE DESOLATION OF SMAUG

lord of the rings peter jackson The Hobbit: The Desolation of Smaug by Caroline Russo | on December 23, 2013 | 0 comments | in Film Release & Reviews | Like it 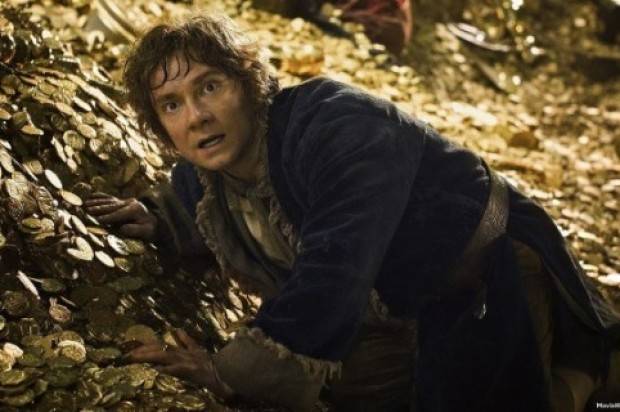 CINEMA RELEASE: THE HOBBIT: THE DESOLATION OF SMAUG
Release date: 26th December 2013
Director: Peter Jackson
Cast: Martin Freeman, Ian McKellan, Luke Evans, Orlando Bloom, Evangeline Lily, Benedict Cumberbatch, Richard Armitage
Classification: M (Fantasy Violence)
Review by Peter Gray
Depending on what edition of ‘The Hobbit’ you read, J.R.R. Tolkien’s slim volume only comes in at around 300 pages, so it’s only fair to wonder just how director Peter Jackson and co-writers Fran Walsh and Phillipa Boyens have come to expand such material given we are now presented with the second piece of a trilogy, all of which clock in at over 2 and a half hours each.
The first film, ‘An Unexpected Journey’, supplied the pessimists (myself included) with plenty of ammunition as it proved too long, seeming to be stretched out purely for the sake of consistency with the original ‘Lord of the Rings’ trilogy – to which ‘The Hobbit’ can’t match. I can say though that ‘The Desolation of Smaug’ is a better film than its predecessor, but once again tends to suffer from being overly long. If you aren’t a fan of these films then you won’t be swayed and, as such, a recount of the plot won’t make a whole lot of sense but for those who have waited with baited breath, ‘Desolation…’ picks up right where the first film left off with Bilbo Baggins (Martin Freeman) and his dwarf companions, led by Thorin Oakenshield (Richard Armitage), continuing on their quest to face Smaug the dragon (voiced by Benedict Cumberbatch). Their journey is halted along the way when they encounter elves Legolas (Orlando Bloom) and Tauriel (Evangeline Lily), and human Bard the Bowman (Luke Evans), heir to the throne of Girion, the last King of old Dale.
As I said if you’re asking who or what then you’ve come to the wrong place, if not then you’ll be happy to know that ‘The Desolation of Smaug’ starts the action almost immediately. The long drawn-out sequences set in the hobbit’s home area are gone, and instead we’re treated to our heroes dealing with their post-confrontation with the slimy Gollum, and that the precious ring is starting to work its evil magic on poor Bilbo. The first section of the film deals with Bilbo using his new found powers to help his Dwarf companions escape their various foes; a duo of sequences featuring a rather uncomfortable escape from a nest of giant spiders and a highly amusing water-barrel escape proving true highlights.
When Legolas and Tauriel are introduced the film appears to hit its stride, with Evangeline Lily’s addition truly inspired as she brings a much needed feminine energy to the trilogy. Created specifically for the film, the added touch of romance and sex appeal she delivers makes up for the lack of either seen (or not-seen) in ‘An Unexpected Journey’ – though I’m sure hardcore Tolkien enthusiasts will disagree. Bloom is once again right at home as Legolas, despite the ten year gap between filming the trilogies, and he eerily appears just as fresh faced as he did back then (though I suspect a few digital touch-ups were applied as in close up his face is unnaturally smooth). In an odd move, at least from a story point of view, Bilbo and his crew are relegated to support actors throughout the middle section of the film as focus shifts to Bard the Bowman, but the jagged vitality Evans brings to the role is the closest these films have come to matching what Viggo Mortensen brought to the ‘Lord of the Rings’ trilogy, and for that this film is all the better.
As good as the new additions are though, I still couldn’t get behind ‘The Desolation of Smaug’ as it all just eventually seems too slow. A borderline three hour film seems redundant with much of the movie, particularly in its second half, feeling like material best left for the ‘extended cut’ rather than the theatrical version. Jackson likes to draw things out when he should be honing it in, and though I’m sure the fans will love it (and I’m aware my opinion won’t matter to said fans), a casual viewer like myself finds it hard to see the passion and the necessity behind it.
My rating 2.5/5 (Journey left me absolutely desolated)