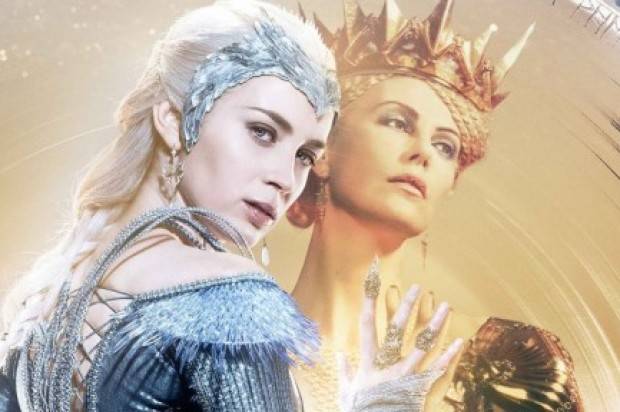 A live-action account of Disney’s ‘Frozen’ (minus the musical numbers) by way of a smaller scale ‘Lord of the Rings’ is a relatively apt description of the mentality ‘The Huntsman: Winter’s War’, the prequel-cum-sequel to 2012’s ‘Snow White and the Huntsman’, has adopted. Unnecessary as it may be, the decision to nix Kristen Stewart’s bland Snow White proves a wise one as Chris Hemsworth’s titular huntsman and Charlize Theron’s vampy Ravenna, an evil queen if ever there was one, were often singled out as two of the highlights from the original, and ‘Winter’s War’ allows the duo to shine brighter and put their respective charms forward for maximum effect.

A surprisingly coherent storyline that fuses events that take place both before and after ‘Snow White…’ a gravelly voiced Liam Neeson narrates a tale that begins in the kingdom of power-hungry Ravenna and her placid (at least in comparison) sister Freya (Emily Blunt). Love is an emotion not afforded here, and so the forbidden relationship Freya shares with a taken man (a cameo spot from TV’s Merlin, Colin Morgan) and the eventual child they birth spurs a fire within Ravenna which results in the most tragic of outcomes. For Freya this all proves too much as her pain manifests itself into an inner power that expresses itself outwardly in the form of an icy exterior that allows the costume department to deck Blunt out with a sleek, silver hairdo, a fabulous white-heavy wardrobe and nonsensical-but-aesthetically-appealing glittery accessories such as the half-mask she wears at any given moment which allows her to view any and all aspects of her kingdom.

The notion that love is a sin is one Freya takes very seriously as she vows to storm the local villages and kidnap all the children she can (bringing into play that good ole’ “if I can’t have children, nobody can” bit) to raise them as an army – her huntsmen. It doesn’t take long before we witness the illicit bond shared between two of said huntsmen, Eric (Hemsworth) and Sara (Jessica Chastain), which will naturally only end in heartbreak, and the separation between the two is essentially where the prequel side of ‘Winter’s War’ ends. From here on the film becomes a more traditional adventure film as the reunited Eric and Sara, along with the unlikely dwarf quartet of Nion (Nick Frost, reprising his role from the first), his ally Gryff (Rob Brydon), the feisty Mrs. Bromwyn (Sheridan Smith), and her sidekick Doreena (Alexandra Roach), make their way across the land with the infamous golden mirror in tow.

A generous dose of comedy – Hemsworth’s got a healthy sense of wry delivery – and a handful of predictable action sequences, as well as CGI-driven creations like golden-horned gorillas, grass-laced snakes and night-time fireflies, manage to fill in the time as we eagerly await the triumphant return of Ravenna whose formation out of liquid gold helps inform us that her existence is tied purely to the mirror. With first-time director Cedric Nicholas-Troyan having worked as visual effects supervisor on ‘Snow White…’ it only makes sense that the visuals in ‘Winter’s War’ are one of the film’s strongest aspects, and although a lot of what transpires on-screen is ridiculous, there’s no denying how appealing it all looks.

For a film that boasts three of the industry’s strongest players, it is a shame that ‘Winter’s War’ is far beneath the talents of Blunt, Chastain and Theron, but it’s evident how much fun they are having and I could honestly watch Theron vamp it up all day as she oozes an effortless blend of sexuality and villainy to no end. An enjoyable-enough fantasy outing that exists purely for entertainment’s sake, ‘The Huntsman: Winter’s War’ survives on the strength of its cast and its willingness to not take itself too seriously.