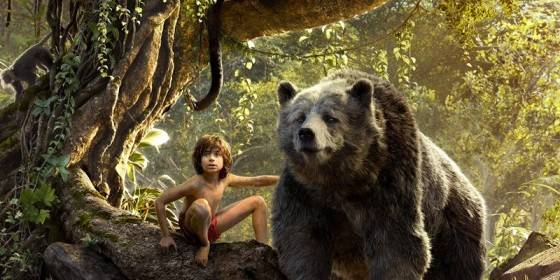 As the final credits scroll down the screen, “Filmed in downtown Los Angeles” breezes by in such a casual manner that you can’t help but be floored by the sheer magnitude of what director Jon Favreau (‘Iron Man’) has achieved with ‘The Jungle Book’. Zookeepers, motion-capture performers, the staff at Jim Henson’s Creature Shop and, most prominently, visual effect creators have worked over-time on crafting a deliriously realistic jungle surrounding that brings to life Disney’s classic 1967 animated fable (derived from Rudyard Kipling’s 1894 story collection) in a far more successful manner than what we’ve seen in previous live-action adaptations ‘Alice In Wonderland’ and ‘Maleficent’.

Screenwriter Justin Marks (‘Streetfighter: The Legend of Chun-Li’ – we won’t hold that against him) stays close to the path that was paved in the animated version with orphaned boy Mowgli (newcomer Neel Sethi) being raised in the wilderness under the protection of a wolf pack. Lead by Akela (voiced by Giancarlo Esposito) and Raksha (Lupita Nyong’o), and guided by his saviour Bagheera (Ben Kingsley), a wise panther, Mowgli has grown up knowing only the ways of the wolf. Though tolerated by the throng of animals that occupy the jungle, fearsome tiger Shere Khan (Idris Elba), whose face was disfigured by “the red flower” (known to humans as fire) in an attack wielded by Mowgli’s biological father, demands the young boy be turned over to him. Defying Shere Khan’s orders Bagheera attempts to take Mowgli to the man-village, only for them to be separated which lands Mowgli in the coils of a mammoth snake, Kaa (Scarlett Johansson), the company of a hedonistic bear, Baloo (Bill Murray), and the clutches of power-hungry ape, King Louie (Christopher Walken), who intends to claim the “red flower” for himself in a bid to raise his position in the evolutionary chain.

As moments between Mowgli and Baloo noticeably lighten the mood following the nightmarish sequence centred around Kaa, Shere Khan’s reign of terror back at the wolf pack’s domain invites the inevitable showdown between man and beast as Mowgli learns his place in the jungle is somewhere between acting on human nature and adopting animalistic tendencies. Sweeping through every facet of the jungle alongside young Mowgli, Favreau and cinematographer Bill Pope (‘The Matrix’, ‘Spider-Man 2’) capture both its beauty and brutality, as well as introducing us to a string of eccentric characters who all appear as nothing less than genuinely authentic; each voice actor – which also includes the late Garry Shandling as a neurotic porcupine – disappears into their animal counterpart with considerable ease.

If there’s one area of ‘The Jungle Book’ that doesn’t soar as majestically as it should, it’s in the two semi-musical numbers Favreau has awkwardly injected into the proceedings. Correct as he may be in assuming audiences would want to hear the beloved songs that are “The Bear Necessities” and “I Wanna Be Like You”, the manner in which they are incorporated are highly inorganic to their surroundings; the performance of the latter feels particularly out-of-place, even if there’s plenty of joy to be had in hearing Walken croon the tune.

That minor misstep aside ‘The Jungle Book’ is an absolute gem of a feature, a family-aimed adventure that once again plays in the favour of its older viewers with the humour, themes and violence all appearing more suitable for an audience old enough to remember growing up with the original animated film.