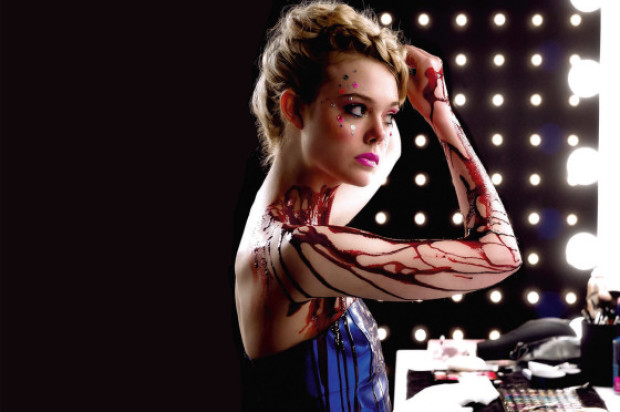 Nicholas Winding Refn is arguably one of the most divisive directors working today. Whilst audiences and critics found common praised ground with his 2011 neo-noir crime thriller ‘Drive’, there was a less-than-enthused reaction to its follow-up, 2013’s ‘Only God Forgives’, where it infamously received simultaneous boos and applause from the audience at the Cannes Film Festival. “Pretentious” and “self-indulgent” are words that like to get thrown around when describing Refn’s work and they are verses not without merit, but just as much as he will have his detractors, there’ll be defenders too, and his latest offering is likely to spark a similar debate.

Fans of the Refn who draws out his sequences to the point of exhaustion and laces his screen with trippy, could-be-metaphorical imagery are likely to warm to ‘The Neon Demon’, a psychological horror experiment of sorts that slinks its way on screen with vapidity and self-assurance. It’s a visually stunning film without question but when you strip all the aesthetics away, you’re left with a film that has nothing new to contribute. The title alone is open to one’s own interpretation, and personally I deemed the “neon demon” as the city of Los Angeles where this increasingly bizarre film is based.

Despite a near two-hour running time, ‘The Neon Demon’ could get all its story told in at least half that as it over-extends each frame with inane pauses in its dialogue and protracted sequences whose purpose it seems are only to validate Refn’s knack for colour; a rather ironic inclusion given that the director is colour-blind. As for this story, its focus is on 16-year old Jesse (Elle Fanning, loving the camera right back with her porcelain skin and wide-eyed stare), a runaway who has the LA fashion scene in her sights. Jesse’s apparent inexperience and innocence would ordinarily deem her easy prey, and when she meets insipid model set Gigi (Bella Heathcote) and Sarah (Abbey Lee) you fear that the dead-eyed duo are going to eat her up and spit her back out again; and given that this film every so often likes to take the literal approach, that phrase couldn’t be more apt.

Predictably, Jesse’s rise in the fashion food-chain happens at an alarming rate (well, as alarmingly as Refn allows) and the intoxication she devours during this process leads her on a fatal path. Where the film ultimately lands is unexpected, and if you so desire to witness ‘The Neon Demon’ for yourself, do it without knowledge as the final moments of this nasty film are truly surprising in their viciousness.

Though I wouldn’t say ‘The Neon Demon’ is a film I enjoyed, it was still one that kept me interested despite all the aggravations I find with Refn’s methods. Fanning makes for a fine protagonist, the Australian twosome of Lee and Heathcote serve up intriguing performances, Keanu Reeves makes for an amusing guest appearance as a seedy motel owner, and Jena Malone is hauntingly captivating as a make-up artist whose intentions towards Jesse wrestle between poisonous and pure (she also dominates two of the film’s most memorable sequences, one of which certifies the film’s R18+ rating) but, sadly, a cast of dedicated performers aren’t enough to mask a film whose beauty is purely superficial.