film review Joseph Gordon-Levitt Peter Gray Seth Rogen The Night Before by Caroline Russo | on December 6, 2015 | 0 comments | in Film Release & Reviews | Like it 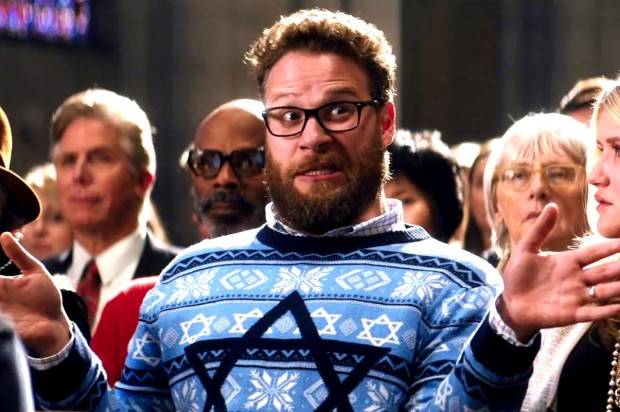 While time will tell if ‘The Night Before’ becomes something of a staple for viewers around the holiday period, there’s no denying that writer/director Jonathan Levine has created a particularly funny Christmas-themed comedy that serves as one of the better offerings set around the festive season. Reuniting with his ‘50/50’ stars Seth Rogen and Joseph Gordon-Levitt, Levine lets the reigns loose with this considerably off-the-wall yet still heartfelt laugher that benefits from the natural chemistry between Rogen, Gordon-Levitt and Anthony Mackie.

The trio play a group of best buds who have spent every Christmas together for the last 14-years and are now looking to close that tradition off with Rogen’s Isaac settling in for family duties and Mackie’s suddenly famous football player Chris seeing his time become considerably more precious due to this rising status. This leaves Gordon-Levitt’s perennial loser Ethan to fend for himself as he’s in the woes of unemployment and singledom following his split with Diana (Lizzy Caplan, charming as always), the kind of ultimate girlfriend only cinema can create. As they plan to visit every possible spot they have made their own for the last decade of Christmas’s, the ultimate destination this year is an elusive party known as The Nutcracker Ball, and Ethan has managed to round up some tickets for what promises to be a night they’ll never forget.

With Rogen on board you can only imagine the type of juvenile, frat-boy humour one will experience throughout ‘The Night Before’, and though it has its share of foul language and considerable drug use, it’s far safer fare than what he played with in ‘The Interview’ and underneath all the debauchery lies surprisingly decent values. For his part Rogen is typical but hilarious, clearly revelling in the opportunity to play out every negative drug reaction one can have when his wife (the extremely likeable Jillian Bell) shouts him some Christmas cheer in the form of a goodie-bag filled to the brim with illicit drugs. Mackie’s arc is more of a filler-type situation with the idea that his character has only become a grade-A football player at the near-retirement age of 34 due to the use of steroids, but the actor is immensely photogenic and he gets some neat, albeit random, comedic moments with his character constantly pursuing a hipster-grinch (Ilana Glazer), a situation that amusingly references fellow Christmas films like ‘Home Alone’.

The outrageous stints from Rogen and Mackie leaves Gordon-Levitt to essentially play the straight-man, embodying the heart of the story as, in addition to his pining for Diana, the catalyst to the trio beginning their tradition when his parents are killed in a car accident, leaving Isaac and Chris to step in as honorary family. As seems to be custom with Rogen productions, James Franco pops up in an amusing cameo as a potentially exaggerated version of himself, Miley Cyrus is surprisingly effective in a similarly-themed embellishment of her persona, and Michael Shannon makes for the film’s biggest amazement as an insightful weed dealer known as Mr. Green who practically steals every scene he’s in with his deadpan delivery.

Not the type of comedy that will alter the genre in any way, shape or form but especially hilarious in its own right, ‘The Night Before’ emerges as both one of 2015’s funniest outings and a film I would personally be ecstatic to add to the list of seasonal comedy viewings.