CINEMA RELEASE: THE OTHER WOMAN 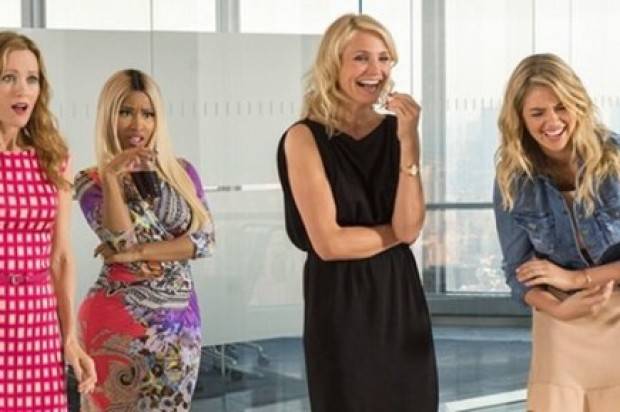 CINEMA RELEASE: THE OTHER WOMAN
Release date: 17th April 2014
Director: Nick Cassavetes
Cast: Cameron Diaz, Leslie Mann, Kate Upton, Nikolaj Coster-Waldau, Nicki Minaj, Taylor Kinney, Don Johnson
Classification: M (Sexual References, Coarse Language and Mature Themes)
Review by Peter Gray
The promotional imagery for ‘The Other Woman’ – the three female leads in a semi-hug next to a tagline boasting “The oddest friends are about to get even” – ensures that audiences know exactly what they are going to get with this revenge-themed chick flick, and to the film’s credit, it delivers what it promised. Funnier than it has any right to be, especially after an admittedly slow start, ‘The Other Woman’ is a disarmingly humorous adventure that owes a lot of its enjoyment to leads Cameron Diaz and Leslie Mann.
As the film begins with a montage of “couple” moments between tough-as-nails lawyer Carly (Diaz) and Mark (Nikolaj Coster-Waldau), a handsome start-up company financier with too much style and charm, you’d be forgiven for thinking director Nick Cassavetes (‘The Notebook’, ‘My Sister’s Keeper’) has fallen on old habits and overdone the sap factor. It isn’t long though until we realise Mark is married and the film presents us with a contrasting insight into the life of his wife and his ‘other woman’; wife Kate (Mann) has no job and is surrounded by humdrum complications in their picture-perfect Connecticut home. Carly lives the life of supposed decadence with a successful career and sleek New York apartment, all the while swishing from scene to scene in head-to-toe designer attire.
When the two finally come to a head over Mark’s infidelity, the film really starts to come alive with the script becoming more biting as it travels along and the push-pull relationship between Carly and Kate taking full flight when the duo share confidences over tequila shots, copious glasses of wine, and a dress-up session in Carly’s wardrobe (which thankfully doesn’t descend into the hideous montage it threatens to be). With an elegant sexuality and unmatched comedic timing, Diaz is in full-flight as she shuts down the notion of monogamy and romance again and again, initially crushing the more hopeful Kate (“Cry on the inside like a winner” becoming a kind-of unofficial mantra for the two) who, as performed by Mann, steals nearly every scene as she effortlessly combines her mix of wide-eyed innocence with an unhinged onslaught of slapstick, resulting in the type of performance that betters the clichéd material.
By the time the two have travelled to an idyllic beachside estate to play detective, under the correct assumption Mark has a third lover on the go, the introduction of Sports Illustrated model Kate Upton as not-so-bimbo Amber feels like it could be a plot device only to keep the film running at a reasonable length, and although Upton has very little to do besides flaunt her considerable physical assets, she’s deliriously likeable and adds a nice dynamic to the already established relationship between Diaz and Mann, with the former harbouring slight jealousy and the latter in a state of awe. As the film heads towards the inevitable takedown of Mark and his corporate finances, bringing to mind the similarly themed ‘The First Wives Club’ (1995), various acts of unsophisticated comedy have taken place as part of the girls’ revenge checklist – dipping his toothbrush in the toilet, hair removal cream in place of shampoo, a nasty incident involving laxatives – and although it’s very been-there-done-that, it doesn’t detract from how funny it is.
Comedies specifically aimed at a female audience have been in short supply lately and ‘The Other Woman’ more than makes up for their absence despite it playing out exactly as you’d expect. An original chick flick would always be a welcome addition to the theatres but as it stands ‘The Other Woman’ delivers what it promises, it’ll make you laugh despite yourself and its breezy, fluffy mentality will leave you feeling rather elated.
My rating 3/5 (Three’s an enjoyable crowd)