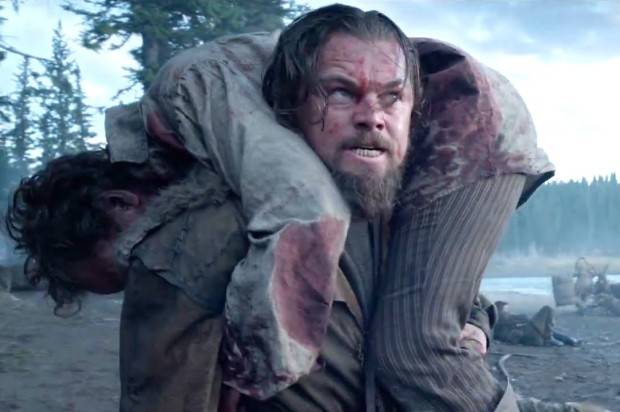 Weight loss, weight gain, dangerous stunts, extensive prosthetics…these are just some of the extremities actors will adhere to in order to submerge themselves into particular roles; but how genuinely dangerous is one willing to go? In ‘The Revenant’ Leonardo DiCaprio puts himself through near-literal hell for the type of role that very few actors would be prepared to wholly participate in. As his character braves the harshest terrain to exact revenge on the one who wronged him, DiCaprio runs the gauntlet of personal limitations as he survives live burials, brutal attacks and hypothermic situations.

In 1823, along the Missouri River, legendary frontiersman Hugh Glass (DiCaprio) managed to will his way across 200 miles of unforgiving American terrain to find the men who abandoned him as he was clinging to life following a near-fatal bear attack. Prior to this savage attack (a sequence so gut-wrenchingly convincing it’s hard to not believe we’re watching DiCaprio cling to his own life) Glass was part of a fur-trading expedition lead by Major Andrew Henry (Domhnall Gleeson). In the opening moments of Alejandro G. Inarritu’s film we’re reminded of the extensive takes so masterfully utilised in his previous effort ‘Birdman’ as we lay witness to Henry’s men attempt an escape from a troupe of natives, only for a handful of them to survive with their lives intact. From one terrifying situation to another, Glass is reduced to little more than punctured flesh and exposed bone after being mauled by an instinctive bear, leaving Henry and his men to decide on Glass’s fate. Henry is determined to haul Glass back home to base camp, an action that doesn’t sit well with John Fitzgerald (Tom Hardy), a quiet yet unpredictable man who is already chagrined by the presence of Glass and his half-Native American son Hawk (Forest Goodluck). As the group come to the realisation that transporting Glass is a near-impossible task, Hawk, Fitzgerald and fellow expeditioner Bridger (Will Poulter) stay behind to either lay Glass to rest with a proper burial or wait out their time for the eventual rescue party.

We’re aware the latter is an unlikely option, and given Fitzgerald’s impatience and violent tendencies he refuses Glass an organic termination, and in the scuffle between a desperate Fitzgerald and a stubborn Glass, tragically it’s Hawk that’s counted as the casualty. Managing to convince Bridger to leave Glass to die in a shallow grave, Fitzgerald takes off back to base camp unaware of the tenacity Glass possesses as he crawls his way out of his burial ground to commence an arduous trek to seek out Fitzgerald. From here out ‘The Revenant’ presents us with primarily Glass’s hardships with the elements as well as the mindset of both Fitzgerald and Bridger, the latter far more disturbed and troubled by his actions than the former. With cinematographer Emmanuel Lubezki only using natural light the film has this real sense of chilling authenticity, and as we watch Glass brave the severest of surroundings, it’s hard not to be sucked in to it all as a viewer as Inarritu occasionally splashes the lens with blood or fog, reeling us in to make us feel like we’re beside the incredibly brave DiCaprio.

On the subject of DiCaprio, his work here is more than just a performance; he gives himself completely to the role of Glass, his face an expressive canvas of agonizing pain and fierce discomfort. It’s an unattractive yet admirable role that more than reaffirms the actor as one of the greatest, and most fearless, of his generation. It’s an Oscar calibre role that will hopefully reap him the award he so deserves; if there’s one actor who can convince us that they are the character they’re playing, it’s him. Similarly as good is Hardy, though slightly indecipherable at times he is no less an imposing force and, much like DiCaprio, willing to throw himself into the undesirable aspects of the role to deliver the most faithful performance possible.

Much like ‘Birdman’, I imagine ‘The Revenant’ will divide viewers into those who love it and those who oppose it greatly. Personally, I was flawed by the violent beauty and unflinching realism that was screened before me, with the unmatched DiCaprio delivering the type of performance that defines what it is to be an actor. Unpleasant but brilliant all the same, ‘The Revenant’ is a technically stellar achievement that, regardless of individual reactions, deserves respect above all else.