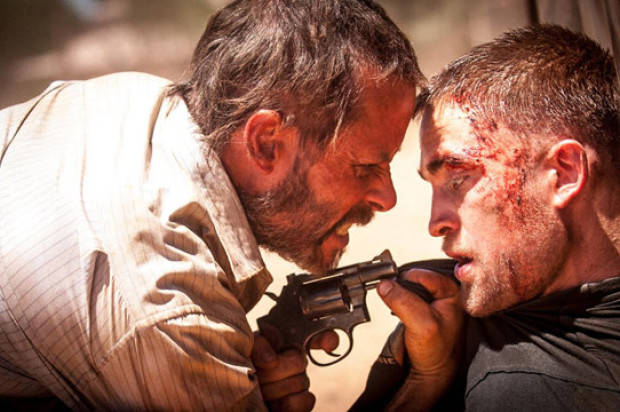 After such a brilliant, and disturbing, start to his career with ‘Animal Kingdom’, there’s unsurprisingly a high level of expectation on director David Michod’s follow-up. Whilst it is unlikely that ‘The Rover’ will reap the same rewards as his aforementioned debut, there’s still a level of satisfaction in this sophomore project as, at the very least, he’s created something that sets itself apart from the current wave of cinema. Embraced or rejected, ‘The Rover’ will certainly induce a response from its audience.

Set in outback Australia ten years after “the collapse”, our beloved country has become a barren wasteland where all races scramble to survive, accepting only US currency as forms of payment. Just what exactly happened to Australia is never addressed, and as the story spurs on you will be left with more questions than answers. When we first meet Eric (Guy Pearce) he appears a tired and broken man with little determination, which is until he learns a trio of men have lifted his car and it soon becomes apparent how prized a possession it is to him. A hot-blooded pursuit ensues which eventually leads Eric to Rey (Robert Pattinson), the simpleton brother to Henry (Scoot McNairy), one of the three men responsible for stealing Eric’s transportation.

Injured from a presumed robbery gone wrong, the jittery, dependent Rey is the unlikeliest of companions for the bitter Eric, and it’s this dynamic that is arguably the film’s most interesting. With his intense stare and emotionally wounded body language, Pearce delivers a brilliant performance as he readily embodies Eric. Pattinson is equally as impressive, disappearing into his troubled character in a manner un-thought of for the former ‘Twilight’ pin-up. Despite his rather violent acts Rey appears to be of an innocent mind – his nervous, unpredictable nature proving more a product of manipulation. It’s a bizarre relationship but it’s one that drives this bleak adventure towards a frustrating yet fascinating climax.

Whilst it is understandable to leave ‘The Rover’ cold, it’s likely to be a story you will deliberate over long after you’ve witnessed it. The helplessness and distress that lies underneath the surface of isolation and brutality becomes more apparent as the world Michod has created (in union with actor Joel Edgerton) develops more of its own self, a world we certainly don’t want to face. I personally exited the film unsure of how I felt, and the more I think about it the stronger my feelings are on a technical point of view as the film is interestingly structured, but I felt emptier towards the content as I wished this dilapidated outcome from the collapse of civilisation had been explored further. I don’t need stories wholly fleshed out or every detail graphically described but there is obviously an intensely thought-out back story to ‘The Rover’, that any of its elements would’ve been appreciated had they been put to screen.

With ‘Animal Kingdom’ being as impressive as it was for a debut feature there’s a level of intrigue built in to ‘The Rover’, with Pattinson’s appearance likely to be a drawcard also. In addition there’s a slew of fascinating performances from the likes of David Field as one of the car thieves, and Gillian Jones as a baleful old woman running an unsavoury business, not to mention the stunning cinematography from Natasha Braier which showcases the desolate dystopia, bringing to mind the original ‘Mad Max’. Highlighting the dark mentality that appears to come rather naturally to Australian filmmakers, ‘The Rover’ is certainly an experience – just how enjoyable lies with the individual.