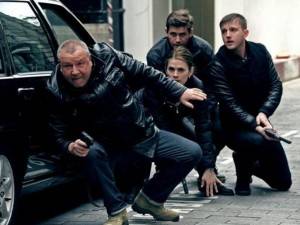 Films based on television series have certainly resulted in a mixed bag of cinema over the years.  For every ‘Mission: Impossible’ and ‘Charlie’s Angels’ there’s a ‘Dark Shadows’ or an ‘Avengers’ (and I’m talking the 60’s spy series turned 1998 turkey with Uma Thurman and not the league of extraordinary Marvel superheroes) and in the case of ‘The Sweeney’ it falls somewhere in between.  Based ever so loosely on the British cop drama series from the 1970’s (in the same way ‘The Dark Knight Rises’ has been so far removed from the Adam West ‘Batman’ series), The Sweeney is London’s Metropolitan’s Flying Squad who have derived their name from a cockney rhyming slang (Sweeney Todd = flying squad) and have a particular way of dishing out justice.

Not bothering with an origin story and placing us almost instantly in the action with an already formed Sweeney (a smart choice) the film’s opening focuses on the tail end of their latest case as they down a heavy serving of alcohol and celebrate another apparent victory.  From here we gather that the heavy-set, no nonsense Jack Regan (Ray Winstone) is the leader and the more passive yet ever loyal George Carter (Ben Drew) is his second-in-command.  Despite the age difference its evident these two have a history working alongside one another with an almost father-son bond shining through.  With Winstone and Drew scoring the larger parts within the Sweeney their relationship obviously contracts the most focus and you’d be hard pressed to single out any of their co-workers as anything other than ample support, save for Hayley Atwell who makes her presence felt when it’s revealed her character is having an affair with Regan.  Atwell, doing her best Kate Beckinsale impersonation, is a fine talent and its clear the camera loves her but the initial moments of her and Winstone having intercourse in a public restroom is certainly a jarring experience and doesn’t seem quite feasible.  It’s only when we get glimpses into their relationship that we start to understand just how something between the two would be possible, and to their credit they manage to make it work.

Reading this it sounds as if ‘The Sweeney’ is nothing but a relationship drama masquerading as an action film but there is indeed a cohesive plotline that moves the film forward at a curt pace.  Investigating a recent jewellery heist where a female customer has seemingly been randomly killed in the process, the Sweeney believe they have the case all wrapped up when they conduce it’s the M.O. of a wealthy criminal they have had the displeasure of dealing with prior.  It’s all appearing a bit too good to be true with their suspect, and without spoiling too much this proves to be the case, and further investigation leads them to examine this “random” killing more closely.  With a bevy of villains introduced at this point (it seems to be the way that every thug and criminal knows each other) the film’s narrative does start to wear a little thin and it becomes obvious that the central idea they have is strong it’s just piecing it together that proves a slight problem.  But when in doubt add action and ‘The Sweeney’ indeed throws some stellar sequences our way to make us temporarily forget the intricacies of the story; the main attraction being a lengthy shoot out in mid-day London that travels to a particularly tense car park showdown.

As is the case with most TV turned films, it’s the cast that hold it all together and Winstone is indeed the biggest piece of glue.  Not one for conventional charm or sex appeal, he somehow manages to still come across like an appealing character, and the film would more than likely suffer if he wasn’t involved.  Drew, a rapper who is known by the name Plan B, proves surprisingly natural in his crossover to film, and he deserves a lot of the credit next to Winstone in allowing festivities to stay afloat.  The duo has a strong back and forth with Drew’s kinder nature complimenting the more blunt approach Winstone takes.  The only other name of note is Damian Lewis who is gaining traction thanks to his work on TV’s ‘Homeland’, but sadly his pencil pusher desk job type in a suit and tie is a particularly thankless role and if he wasn’t remotely recognisable you can imagine this role being filled by any day player.

I had no knowledge of the original TV series prior to learning about this film, and I think entering the screening with low expectations assisted in me enjoying this as much as I did as it’s far from a great film and nothing we haven’t seen before but in the current wave of cinema that is particularly low on substance ‘The Sweeney’ reigns supreme.

My rating 3/5 (Kills the time without wasting yours)