CIMEMA film reviews the wall War films by Caroline Russo | on August 9, 2017 | 0 comments | in Film Release & Reviews | Like it

Having earned his stripes in the action genre with sizeable features like ‘The Bourne Identity’, ‘Mr. and Mrs. Smith’ and ‘Edge of Tomorrow’, director Doug Liman opts to scale it back considerably for ‘The Wall’, a uniquely intimate thriller that highlights the realistic horrors of war whilst playing wonderfully with the Hollywood scope of its set-up.

Similar to the unnerving tension created when watching Colin Farrell beg for his life in ‘Phone Booth’ or Ryan Reynolds’ plea for rescue in ‘Buried’, Liman’s unsettling piece takes place predominantly in one location with the majority of focus on Aaron Taylor-Johnson’s Sergeant Isaac. Isaac is a spotter for Staff Sergeant Matthews (John Cena), a sniper, with the film commencing at the tail-end of a 22 hour long shift the two have endured on investigative purposes at a pipeline construction site in Iraq. The moment Matthews deems the site secure, a wave of tautness floods the screens as the duo realise they aren’t alone in the vast desert space, and when they are separated in location by an old, corroding wall, Isaac realises that the very person he is communicating with for help is the one determined to take him out.

It’s a simplistic plot to say the least, but Liman and screenwriter Dwain Worrell (TV’s ‘Iron Fist’) have embraced its lack of complication and tackled the story beats with an almost-horror like mentality. As easy as it would’ve been for the director to harken back to the beats he played with in the original ‘Bourne’ film, Liman opts to present this nightmarish story far more brutally. Though occasionally the film retreats from itself due to frustrating character actions, for the most part the realism expressed through Isaac’s dire situation – fuelled by his conversations with his tormentor, Juba (Laith Nakli), a man we only ever hear – is superbly realised, with Taylor-Johnson proving more than up to the task to shoulder a project near-singlehandedly.

Continuing to impress with his knack for selecting more challenging work, the striking actor hits all the right emotional notes, no easy feat when his lead co-star is essentially a disembodied voice. As for Cena, his role doesn’t prove nearly as vast as one might expect, though given that he has come to be known more so on screen as of late in distinct comedic performances (‘Trainwreck’, ‘Sisters’) it’s refreshing to see him successfully execute material of a more dramatic nature. The banter the two share in the film’s early stages hints at an effortless chemistry that would have been nice to explore, but ‘The Wall’ doesn’t bathe in the unnecessary, and the separation between the two only elevates our emotional connection to the proceedings.

Though technically classed as a war film, ‘The Wall’ is very much a horror film in terms of its dark temperament and vicious personality. This is a claustrophobic, suspenseful piece about the hells of war and the self-imposed death sentence one essentially signs. Thematically unpleasant but effortlessly impressive in nature, Liman’s savage thriller should be proceeded to with caution as its unapologetic nature may irk viewers expecting a more traditional film. 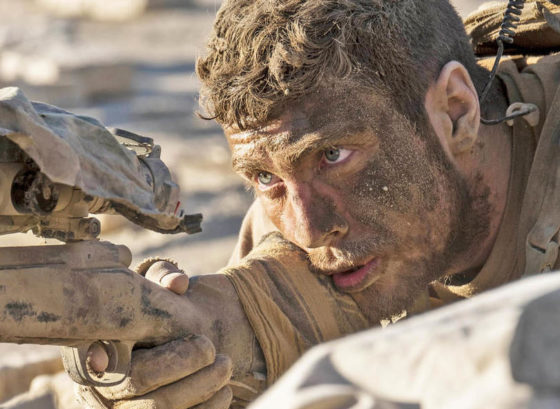 Aaron Taylor-Johnson in THE WALL. from Roadside Attractions press site