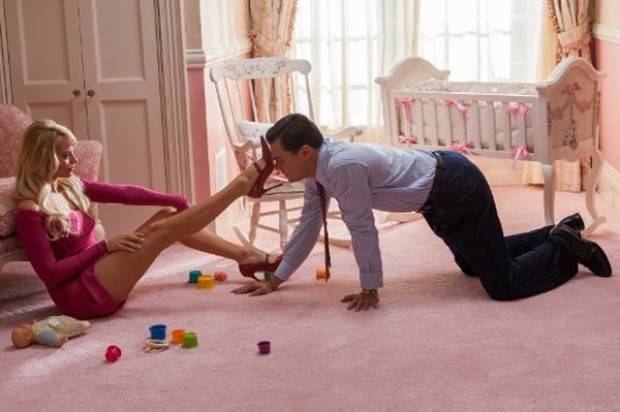 CINEMA RELEASE: THE WOLF OF WALL STREET
Release date: 23rd January 2014
Director: Martin Scorsese
Cast: Leonardo DiCaprio, Jonah Hill, Margot Robbie, Matthew McConaughey, Kyle Chandler, Rob Reiner
Classification: R18+ (High Impact Sex Scenes and Drug Use)
Review by Peter Gray
Based on the life of Jordan Belfort, an illicit stockbroker who scammed millions of dollars off of clueless clients and lived like a king buoyed up by every depravity imaginable, ‘The Wolf of Wall Street’ isn’t exactly a biopic (Belfort’s rags to riches tale is barely touched on) nor is it an apparent exercise in glamourizing his crooked exploits; above all else this film is uproariously funny and further proof that Martin Scorsese, even at 71 years of age, is in complete control of organising excessive chaos.
With the film bypassing his youth, we first meet Belfort (Leonardo DiCaprio) as an eager young 20-something working as a stockbroker at an established Wall Street firm. Starting off relatively humble he is taken under the wing of Mark Hanna (Matthew McConaughey), a particularly brash broker who encourages him to adopt a lifestyle of sex and substances in order to succeed, imparting such wisdom as masturbation twice a day is essential, cocaine will help you dial the phone faster, and the client’s money is not your concern, your own money is. Not long after receiving his licence the Wall Street crash of 1987, known as Black Monday, takes place and his life is seemingly ruined in an instant.
Deterring his wife (Cristin Milioti) from pawning her engagement ring and considering work as a stock boy, Jordan snags another opportunity at a low-rent boiler room in Long Island that deals in penny stocks. Quickly schooling his inexperienced co-workers on how to wring large commissions out of even the lowliest stocks, Jordan assembles a crew (many of whom are just as conscience-free as him) and dubs his brand ‘Stratton Oakmont’, moving his way up the economic food chain until he and his cronies are all making too much money for their limited intelligence to handle. Once Scorsese and screenwriter Terence Winter have established the mindset of these men, the film dives headfirst into wicked decadence with every sexual penchant, drug preference, and lowly concept of fun detailed in graphic fashion. The film arrives here with an R18+ classification and these scenes alone are justification enough as these ultimately nightmarish sequences of drug-fuelled, sex-laced orgies are presented with such vigour yet, at the same time, a grotesque hollowness.
Excessive really is the best word to describe ‘Wolf…’, it’s running time of 179 minutes is bloated as is, but that seems to be the point. Scorsese isn’t high fiving these guys, he’s highlighting how draining and absurd a lifestyle can be when your goal is to live like a trust fund frat boy. Scenes of DiCaprio and his cohorts as they manically scream into their phones, argue amongst each other, and openly do drugs in the office (not to mention group sex participation during work hours) would have you believe that’s how it actually was, but everything here exists in a heightened reality and the constant repetition of these boys’ misbehaving is simply Scorsese wearing us down to ride home the fact that all this frivolity is far from fun.
One feature that never wavers though is Leonardo DiCaprio. I dare say this is the best he has ever been, delivering a performance that’s vanity free and, surprisingly, comically consistent (who knew the man was so funny?) Reminding me of a young DeNiro, the numerous extended speeches and emotional rants he delivers are spot-on in their fusion of cocky showman and rampaging amnesiac. One sequence that serves as a testament to this is an uproariously prolonged moment where Belfort is doped up to the point of near paraplegia on qualudes (his drug of choice) that he renders himself unable to leave a country club and enter his car. This scene is particularly extended and feels like it shouldn’t work, but Scorsese’s persistence and DiCaprio’s dedication somehow make it successful.
In addition to DiCaprio, a stellar support cast has been rounded up with Jonah Hill a specific standout as Donnie Azoff, an easily influenced salesman who latches onto Jordan in the early stages of his career once he realises how much money can be earned in stockbroking. With his husky New York-Jewish accent and a smashing set of (fake) pearly white teeth, Hill once again showcases his effortless comic timing portraying Donnie as a spoilt child in an adult world. McConaughey’s screen time is brief but memorable all the same, Rob Reiner has a heap of fun as Jordan’s fiery father, Kyle Chandler lends a welcome air of authority as the FBI agent looking to catch Jordan out, and Jean Dujardin changes his tune considerably from when we last saw him in ‘The Artist’ as a Swiss banker eager to get into just as much trouble with Jordan’s band of misfits. One of the big finds here though is Gold Coast native Margot Robbie who simply shines as Naomi LaPaglia, the stunning trophy wife Jordan kicks his first wife to the curb for. If you weren’t aware of Robbie’s Australian roots, you’d swear she was a New York local as her Brooklyn accent is flawless, and though in a film dominated by men the presence of any woman will be noticed, Robbie shines even brighter as she bravely tackles a role that on the surface may only require the bare essentials but underneath reveals a strength and sexuality that very few actresses would be willing to deliver.
After working for so long ‘The Wolf of Wall Street’ once again proves Martin Scorsese is never void of new ideas, its actually quite comforting to know the kind of tricks he still has up his sleeve, with this dizzying effort a clever condemnation of the behaviour many believe it glorifies.
My rating 4.5/5 (The big bad Wolf is so, so good)