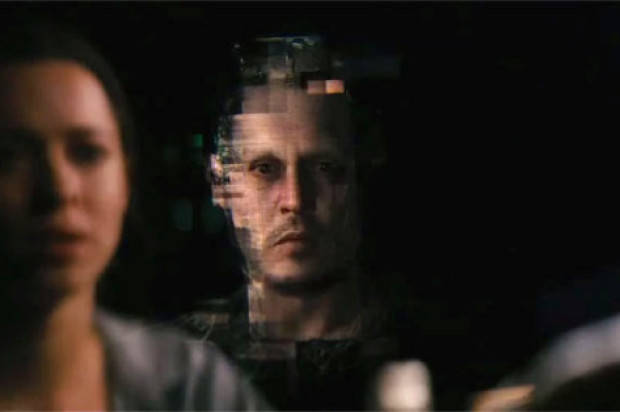 CINEMA RELEASE: TRANSCENDENCE
Release date: 24th April 2014
Director: Wally Pfister
Cast: Johnny Depp, Paul Bettany, Rebecca Hall, Kate Mara, Cillian Murphy, Morgan Freeman, Cole Hauser, Lukas Haas
Classification: M (Science Fiction Themes and Violence)
Review by Peter Gray
Given his frequent collaborations with director Christopher Nolan (‘The Dark Knight’ trilogy) – himself credited here as an Executive Producer – one can’t help but have high hopes for DP-turned-director Wally Pfister’s debut ‘Transcendence’, a high concept sci-fi carrying a sizeable budget and a substantial ensemble lead by the usually reliable Johnny Depp. Admittedly Depp has been on somewhat of a losing streak as of late, with his last major outings, ‘Dark Shadows’ and ‘The Lone Ranger’ failing to connect with audiences the way the studios were no doubt intending, and sadly here he appears bored from the get-go, and given that 70% of his work here is voice-over, there appears to be even less of an energy about him.
It’s not all entirely Depp’s fault though as the film doesn’t give him too much to work with despite ironically presenting the audience with plenty to chew on. The more the film drags on however, its plot unravelling further into absurdity, the more the actors struggle to save face with foreseeable dialogue and imitation emotions. It starts off relatively interesting though as we meet Dr. Will Caster (Depp), something of a rock-star scientist, who believes in the process of “transcendence”, a procedure which brings the human mind into a computer’s hard drive, thus creating an entity that could potentially solve the world’s problems using the knowledge of man-kind. Following an assassination attempt from anti-technology extremists Will is left fatally wounded, and given his intelligence the only logical solution to extend his life is to upload his consciousness to a super computer. What could possibly go wrong?
Whilst the story is essentially a 21st century take on ‘The Lawnmower Man’, a particularly ridiculous science fiction film released in the early 1990’s, it’s evident there’s a great deal of potential contained within the story. What if a man’s consciousness was uploaded to a computer, therefore vaccinating the outlet with his thoughts, memoirs and desires? Would it corrupt him or would this sense of power be used for good? Had these questions been bothered to have been answered in a thoughtful manner, ‘Transcendence’ could’ve been a real gem amongst the genre. Sadly there’s very little imagination running freely here and we’re left with a limp story that fails to activate any of the intelligence the film wants us to believe the characters possess.
In addition to disengaging the audience as a sci-fi outing, the other major factor of ‘Transcendence’ being a relationship drama between Will and his adoring wife Evelyn (Rebecca Hall) also fails to ignite any sort of spark. Even when Depp isn’t relegated to nothing more than a head on a monitor in his post-upload status, there’s a chemistry void between him and Hall, the two delivering off-kilter performances that are strangely listless. Hall is a capable actress but almost from the very start of the film her character is near-impossible to sympathise with, her love for her dying husband seemingly non-existent as she appears more determined to upload him in his final days, and once she cottons on that Will is no longer the man she married, a realisation that takes far too long if you ask me, there’s still a lunacy to her frustrating optimism. Cillian Murphy, as the one lone FBI agent called in to take down Will’s attempt at global technological domination, Morgan Freeman, as Will’s former mentor, Paul Bettany, the best-friend-come-voice-of-reason, and Kate Mara, an icy blonde leading the anti-technology terrorism sector, all perform adequately given their stereotypical character outlines, but it’s all so disheartening to see skilled actors deliver one-note performances, taking their cue from a director clearly out of his depth.
It really is quite sad to talk so negatively against a film like ‘Transcendence’ as this really is a case of an intriguing idea executed poorly. To the film’s credit it looks good, and there’s some neat special effects on hand (although one of the most promising shots presented in the trailer of Depp disintegrating into nothing is wildly wasted when viewed in context) but they don’t even come close to being worthy points of recommendation. Not even bad in a “so bad it’s good” way, ‘Transcendence’ is just bad, bland and worthy of being shut down.
My rating 1.5/5