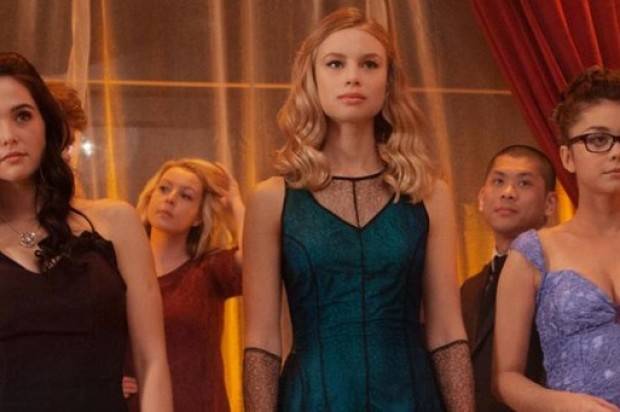 CINEMA RELEASE: VAMPIRE ACADEMY
Release date: 6th March 2014
Director: Mark Waters
Cast: Zoey Deutch, Lucy Fry, Gabriel Byrne, Sarah Hyland, Olga Kurylenko, Joely Richardson
Classification: M (Supernatural Themes, Violence and Sexual References)
Review by Peter Gray
I’m not entirely sure how it happened but the brotherly duo of Mark and Daniel Waters (the former who’s credited with directing ‘Mean Girls’, the latter penned the delicious ‘Heathers’) have somehow managed to create something inexplicably dreadful in the guise of ‘Vampire Academy’, a movie so awful that I can only assume these two capable artists had their project pulled away from them during the post-production phase as this is surely not the work of those responsible for arguably two of the most notable films in the teen-aimed genre.
The first five minutes alone bring about questions of re-shoots and editing troubles as there is so much exposition packed into the opening that it feels like you’re viewing the second film in a franchise having missed the first entry. The dialogue is clunky and unnatural, as is the acting, and whilst the film admittedly settles into itself, it doesn’t exactly get any better. Based on a series of young adult novels from Richelle Mead, ‘Vampire Academy’ tries to adopt a personality of its own with its unique terms for its vampiric creations, in this case Dhampirs, Morois and Strigoi; Dhampirs are half human-half vampire, Morois are full blooded yet peaceful living vampires, and the Strigoi are their evil, bloodthirsty counterparts. You got all that?
17-year-old Rose (Zoey Deutch) is a Dhampir and currently attending St. Vladimir’s Academy where she’s in training to become a guardian to Lissa (Lucy Fry), a Moroi who’s next-in-line for the royal throne. For some reason Rose and Lissa fled the Academy two years prior (this ever-so-briefly explained in the butchered introduction) and are now summoned back where they not only have to deal with the hierarchy of school cliques but also the threat on Lissa’s life from the Strigoi given she’s set to become a royal leader. Even though it’s packed with the kind of tween angst its target audience should lap up, and previously did with the ‘Twilight’ series, ‘Vampire Academy’ can’t summon up enough interest to keep it afloat. It tries to throw in some hand-to-hand combat scenes to appear more action-y than its equivalents and a handful of romance subplots are a clear attempt to recreate the ‘Twilight’ Edward/Bella love story but these all fall short of promise and don’t even entertain on a filler level.
The one thing the film does have going for it is lead star Zoey Deutch who manages to inject a decent amount of spunk and humour into a role that holds very little substance. Saddled with horrendous dialogue, the film won’t do her any favours but if anyone could come out of it unscathed it should be her as she does possess a certain spark that seems rightfully catered to the teen works the Waters brothers are capable of. Queensland born actress Lucy Fry is trying her best as Lissa, faux British accent and all, but her material is even worse that Deutch’s and she’s sadly not as strong an actress. As is the case with most hopeful franchises that attempt to jumpstart the careers of young hopefuls, a few more seasoned names are peppered throughout for good measure with Gabriel Byrne, Olga Kurylenko, Joely Richardson and Sarah Hyland (TV’s ‘Modern Family’) filling the quota. Richardson does so little it seems strange she even bothered to show up whilst Kurylenko tries to liven things up with one of the few performances that doesn’t take itself too seriously. Byrne clearly did this to earn a quick paycheck (and perhaps as a favour to young family members) and Hyland’s geeky girl with a secret is very been-there-done-that but she too at least looks like she’s having a bit of fun.
Much like other franchise non-starters ‘The Mortal Instruments’ and ‘Beautiful Creatures’ (which I happened to of thought deserved better than what it received) ‘Vampire Academy’ will soon be forgotten and wind up as just a footnote on a handful of cast filmographies. It’s particularly bad but sadly it will most likely not be the last awful young adult adaptation we have to suffer through.
My rating 1.5/5 (This sucks)