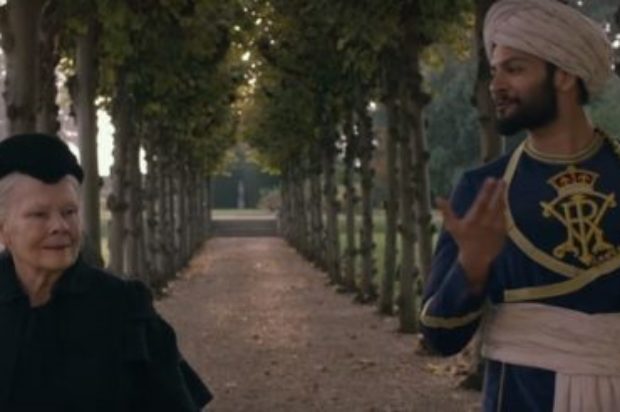 Opening with a disclaimer that it is a story “based on true events…mostly”, Stephen Frears’ ‘Victoria & Abdul’ is a tale of contemporary relevance housed in a historical setting with a sugary sitcom mentality to guarantee itself a warm reception from its respective viewers.

As pleasant as ‘Victoria & Abdul’ proves to be, it’s all quite surface-light and harmless, with Judi Dench’s central performance as an ageing Queen Victoria and Ali Fazal’s doe-eyed turn as the rather adorable Abdul keeping the film afloat. Given that it is titled after both parties, it makes sense for Frears to devote an equal amount of time to the monarch in her 68th year, growing more tired by the day of her royal duties, and to the twinkling Indian who would, against the naysaying of the kingdom, become an integral voice in the household.

Plucked from his position as a prison clerk in Uttar Pradesh in 1887 to present a ceremonial coin at Victoria’s Golden Jubilee banquet in England for no other reason than the fact that he was height-approved as per the job description, Abdul is the unlikeliest of candidates to cause an uproar within the palace walls in the early stages of the film. He’s handsome – something Victoria notes, which ultimately acts as part of the reason she initially calls for his services – and all too eager to teach the queen the ways of his world; something that seems entirely appropriate given she is the Empress of India.

Sputtering dialogue like “Life is a carpet. We weave in and out to make a pattern”, and making it sound wholly convincing through his earnest delivery, the early stages of the film adopt a bubbliness that is well represented through the playfulness Abdul shares with Victoria as they learn about each other. But as commanding as Dench’s performance proves to be throughout, her character’s naivety is somewhat astonishing given her overall influence, with the screenplay from British playwright Lee Hall (‘Billy Elliott’, the 2005 adaption of ‘Pride and Prejudice’) faltering throughout – though not to the detriment of his actors; a scene where Abdul explains the fate of the Peacock Throne (a jewelled throne that was the seat of the Emperors of India) is met with bewilderment on Victoria’s end, though Dench is nothing less than convincing in her delivery.

Ideally, a less polished view on both characters and their relationship would’ve proven to be a more interesting film, but it’s clear that entertaining its viewers is what ‘Victoria & Abdul’ was more intent on achieving. It’s a beautiful film to look at, even dreary moments in the “scratchy” locale of Scotland are a sight to see, and the performances are all uniformly sublime that any superficiality the film adheres to can be forgiven as its heart is clearly in the right place.