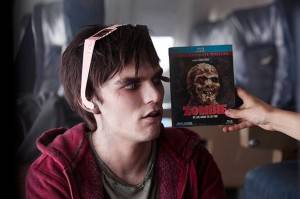 With vampires having over-saturated the market it appears as if zombies are the new go-to guys for undead themed entertainment, and though there is perhaps an over-abundance of zombie movies being experienced, it makes sense that something like ‘Warm Bodies’ would be concocted with it introducing romance into the genre.  Yes, a romantic zombie comedy, or “romzomcom” as it has been coined, has been formed and surprisingly it’s a more successful venture than one might expect.

Following a zombie apocalypse (what else?) the human race live in a fearful, excluded existence in a heavily fortified, walled-off enclave where they eat, sleep and stock up on supplies before venturing out to seek more amenities.  Zombies R (Nicholas Hoult) and M (Rob Corddry), simply known as those letters due to not being able to remember their pre-zombie names, are two of the more friendlier members of the undead, “living” out their days in a run-down airport that now homes thousands of infected zombies, desperately trying to avoid a species of creatures known as ‘bonies’ – skeletal zombies who have lost all trace of their humanity.  R feasts on flesh like a zombie should but as he describes in his narration that he’s a little bit conflicted about it, it doesn’t come as the greatest shock when he displays a little kindness by saving human Julie (Teresa Palmer) when she is involved in a zombie attack.

Initially frightened and unsure of R’s intentions as she is taken back to an abandoned aeroplane that he has set up as his residence, Julie slowly starts to see there is more to R than on the surface and  a bond forms between the two causing R to regain his heartbeat, and eventually his life.  It’s a cute premise, and overall ‘Warm Bodies’ is a particularly cute movie without being overly sappy or too ‘Twilight’-ish (a film this will no doubt get compared to).  If you were worried about it drifting into ‘Twilight’ territory, you need not worry as this is easily better than the vampire saga, and Hoult and Palmer make for infinitely more appealing leads due largely to the fact that the duo are actually talented performers.  Ever since his breakout role in ‘About A Boy’ Hoult has been a particularly likeable presence on screen, and here is no exception as he effortlessly engages the audience with his quiet yet intense demeanour; given that he plays a zombie with very few lines apart from his voice over, it’s a credit to the actor for managing to make his character’s grunts and groans so inviting.

Director Jonathan Levine doesn’t have the most extensive filmography, but it’s an impressive one nonetheless and his back catalogue of work (including the little seen slasher flick ‘All The Boys Love Mandy Lane’ and the splendid dramedy ‘50/50’) has allowed him to inject a fresh perspective on the material, which is essentially a loose take on Shakespeare’s classic ‘Romeo and Juliet’. As R’s ‘Juliet’ Palmer is a particularly sweet inclusion as Julie and, much like Hoult, she’s one of those performers you can’t help but like.  There’s a pleasantness to her that is perfectly suited to the role, and you can see why the sight of her would re-start a heartbeat.

And since we have a ‘Romeo’ and a ‘Juliet’, it would only seem logical that Corddry’s M is this tales Mercutio, and in the role he’s probably having the most fun of all.  Not yet a household name but a familiar face all the same, Corddry’s made a career for himself playing the best friend who is generally of an annoying, over-bearing nature but here he’s unexpectedly effective especially when the film dedicates a neat little subplot involving his own lingering humanity.  Rounding out the cast is John Malkovich as Julie’s father, once again showcasing his affluence at taking a thinly written role and turning it into something far more three-dimensional, and model-turned-actress Analeigh Tipton filling the quirky best-friend role to a tee without being overly generic.

As much as I found myself enjoying ‘Warm Bodies’ (I walked out feeling ever so elated), the film is much more of a romance tale than what the trailers would have you believe, so I should stress that despite their being moments of action, they’re quite sporadic so don’t be surprised when more of the screen time is dedicated to R and Julie goofing around whilst listening to old vinyl records rather than zombie carnage.  If you’re hankering for something dark ‘Warm Bodies’ isn’t your outlet but if you’re seeking a pleasant film experience that doesn’t entirely insult your intelligence, this is certainly a way to go.

My rating 3.5/5 (Plenty of life left in undead comedy)