Cinema Release: What We Did On Our Holiday 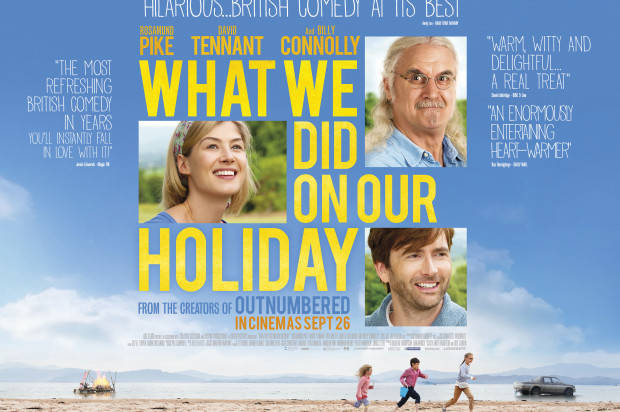 Out of the Mouth of Babes.

What We Did on Our Holiday is one of those love ‘em or hate ‘em movies, so how do you gauge where you stand before you fork out the dosh?

How do you feel about British sit-coms with cute, but totally tactless kids often one step ahead of Mum and Dad?
Because feel good – and I don’t mean US style overtly sentimental – comedy is the key to this family comedy largely set in the Scottish Highlands.

That was the sit-com, screened sometime ago on the ABC, about the middle-class mum and dad (Claire Skinner and Hugh Dennis) with the three precocious and outspoken kids.

Okay I’ll wait while you Google it.

The struggling, although hardly loving, parents in What We Did, Doug and Abi McLeod (David Tenant and Rosamond Pike), are closer to warring then the Brockmans in Outnumbered.

In fact there’s a strong feeling they want to kill each other as they set off with the kids – 10-year-old Lottie (Emilia Jones), brother Mickey (Bobbydridge), 6, and sister Jesse (Harriet Turnball),5, – for Scottish granddad, Billy Connolly’s 75th.

The McLeod’s have made a pact to keep news of their pending divorce from the old man, but in the classic tradition of these, ‘out-of-the-mouths-of-babes,’ yarns there’s no way fate or fidgety youngsters are going to co-operate.
The movie is choc-a-bloc with what might be described as observed domestic comedy as the McLeods head north to more mayhem.

Grandfather Connelly ups the ante as he treats the kids with respect, almost as adults, and naturally wins both their trust and affection.

Lottie’s vulnerability is demonstrated through her insistence on keeping a list of the lies she’s expected to support, while Mickey is obsessed with Vikings and Jesse with her pet rock Eric and larger pet block Norman.
It could all be terribly twee, or worse, but a dark comic spot in the second half changes everyone’s fortunes forever.
In addition to the parents, the kids, the wonderfully old granddad Connolly and the beautiful Scottish landscape, What We Did has a dark and foreboding soul.

There’s a good argument for it having been made for TV – apart from the wonderful scenery – but it’s on the big one and that’s that.

I notice some critics had a problem with the black comedy, in the second half, but that didn’t bother this film goer.
What We Did is hardly a masterpiece, but I really enjoyed it and more often than not that’s as good as it gets.

Before we go, I should mention some memorable supporting talents including Ben Miller of Death in Paradise fame and Amelia Bullmore from Scott and Bailey.

Yes, What We Did On Our Holiday has British telly written all over it, but that’s okay as far as I am concerned.