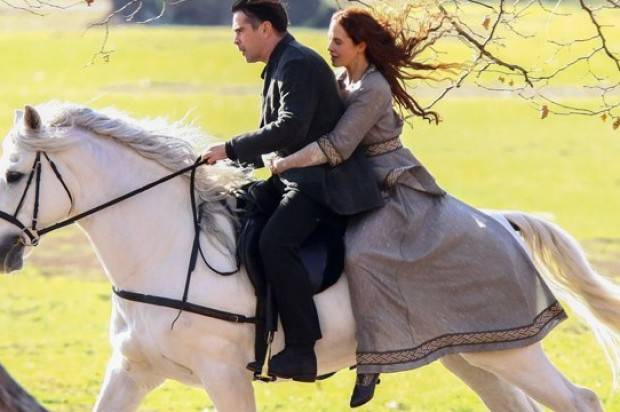 CINEMA RELEASE: WINTER’S TALE
Release date: 13th February 2014
Director: Akiva Goldsman
Cast: Colin Farrell, Russell Crowe, Jennifer Connelly, Jessica Brown Findlay, William Hurt, Will Smith
Classification: M (Violence and Sex Scene)
Review by Peter Gray
In his career as a screenwriter Akiva Goldsman has a rather muddled resume. For every ‘A Time To Kill’ and ‘A Beautiful Mind’, there was a ‘Practical Magic’ and, gasp, ‘Batman and Robin’, and given that, in some circumstances, Hollywood can forgive the greatest cinematic crimes, Goldsman has managed to round up an impressive ensemble for his debut feature as a director – ‘Winter’s Tale’.
Based on the 1983 novel from Mark Helprin, ‘Winter’s Tale’ is a sweeping romance bathed in the overtones of a fantasy feature, focusing on the eternal love between Peter Lake (Colin Farrell), a thief on the run from a demonic Irish gangster (Russell Crowe), and Beverly Penn (Jessica Brown Findlay), the daughter of a wealthy newspaper publisher who also happens to be dying from consumption. This particular aspect of the film, set in 1916, seems like it’ll be relatively straightforward and could possibly veer into Nicholas Sparks territory, but Goldsman – no stranger to mystical elements in his storytelling – keeps things fantastical with an outer-worldly twist.
Peter’s love for Beverly only irks Crowe’s malevolent crime boss Pearly Soames more, and when the film time-travels to current day New York, it tries to make the best sense it can as to why both Peter and Pearly are still alive and haven’t aged a day. Beverly sprouting poetic dialogue about seeing things more clearly and the connection with light eventually becomes clearer to the audience as well, though by the time we meet Peter in 2014 it appears like an intentional act on Goldsman’s half to have everyone involved, audience included, be baffled as to why he doesn’t know his own identity.
If you’ve been willing to go along with the story for the most part, the depictions of heaven and hell presented here will be where your alliance with the film is tested; Heaven is represented as a place set amongst the stars, the (flying) white horse Peter has been riding is none other than his guardian angel, Will Smith shows up as an oddly attired Lucifer, and by the time proceedings have wrapped up Peter is almost God-like with his divine set of powers. You have to hand it to Goldsman for trying to fuse so many elements together but there’s only so much whimsy one can stomach before it becomes too ridiculous to bare.
From a romance point of view ‘Winter’s Tale’ is a minor success as Farrell and Findlay play well off each other, Findlay in particular encapsulates the wide-eyed optimism that comes with new found love, and the support from William Hurt as her father adds a certain respectful weight to proceedings. Jennifer Connelly, most likely owing Goldsman a favour for the accolades she earnt from ‘A Beautiful Mind’, shows up later in the piece with very little to do but thankfully a romance between her and a modern day Farrell isn’t forced, and the surprising appearance of Eva Saint Marie generates that magical feeling the film was no doubt hoping it would achieve on its own merits. As for Crowe, I can only imagine he was happy to earn a cool paycheck for very little in return as he’s wildly over-the-top and practically stuffed from all the scenery he chews.
‘Winter’s Tale’ isn’t a good film by any means, but it’s still incredibly entertaining in that fascinating, car-wreck kind of way where you just can’t look away from the cinematic horror that is unfolding in front of you. Though I was hoping to enjoy the film on an organic level, I have to admit I still walked away entertained – even if it was for all the wrong reasons.
My rating 2/5 (A disjointed affair)