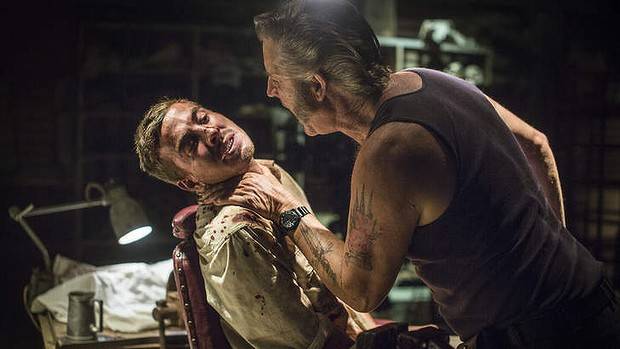 CINEMA RELEASE: WOLF CREEK 2
Release date: 20th February 2014
Director: Greg McLean
Cast: John Jarratt, Ryan Corr, Shannon Ashlyn, Phillipe Klaus, Gerard Kennedy
Classification: MA15+ (Strong Bloody Violence and Coarse Language)
Review by Peter Gray
It’s been 9 years since audiences were last at the mercy of xenophobic bushman Mick Taylor, a near indestructible serial killer of Leatherface proportions, in the Aussie indie slasher ‘Wolf Creek’. With such a lengthy period separating the entries, as well as original writer/director Greg McLean back on board for helming duties, you’d be forgiven for thinking that its aim has had time to be polished.
From the get-go ‘Wolf Creek 2’ makes no apologies in regard to its sadistic mentality and, perhaps hoping to throw the audience for a loop, re-introduces the twisted Taylor (John Jarratt, once again committing 100%) on an almost sympathetic note. In the middle of nowhere two malevolent police officers sit in their vehicle, hidden by a road sign, in hopes of catching a driver over the limit. As a monster truck speeds by, still under the limit however, the duo decides to have a little fun and book the driver regardless. These crooked cops are painted in all shades of immorality and you can’t help but feel bad for the innocent driver – which just so happens to be our favourite outback slaughterer. His revenge is horrific (to say the least) but there’s a degree of evoked empathy for Mick that initially the film feels like it might have more to offer than the simplicity of a slasher.
Hoping to leave its audience with their own pains, ‘Wolf Creek 2’ seems intent on being as unpleasant as possible as the film shifts its focus to a loved up German backpacker couple (Shannon Ashlyn and Phillipe Klaus) who, after braving the desert heat and lengthy walking trail of the infamous Wolf Creek crater, cross Mick’s path in a late night tussle that ends exactly as you’d expect. Mick’s penchant for twisting his hunting knife into the lower back of his victims is displayed in brutal effect once again, though I suspect a few minutes were trimmed from this particular sequence to obtain a lower, more accessible MA15+ rating as it seems a bit too light on the gore front, though nevertheless it’s just as uncomfortable to view.
Seemingly shifting from one violent action set-piece to the next, the film finds its feet when it introduces Paul (a wonderful Ryan Corr), a clean-cut British surfer who, unwillingly, gets involved when he attempts to help a potential victim in distress. His toe-to-toe with Taylor injects some much needed interest into the proceedings which are becoming yet another mindless gorefest. Paul’s quick thinking brings about arguably the film’s finest sequence where, under immense pressure, he squares off with Mick in a trivia game focusing on Australian history. These extended moments of dialogue allow Corr to truly shine and highlight Jarratt’s all-too-easy ability to play pure, unedited evil – though perhaps a few cuts to the profanity wouldn’t have gone astray as the use of the ‘c-word’ is overdone to the point it becomes nauseas to hear.
Looking at the film against the original, ‘Wolf Creek 2’ feels like less of an organic continuation and more of a cash-in on something that struck a chord with the public all those years ago. The upped budget is evident though and it certainly allows for some exciting sequences, the main two taking place on protracted stretches of open road. One is an almost too typical Hollywood dual between a jeep and a big rig, the other involves the slaughter of a herd of kangaroos who opt to cross the road at the wrong moment; this scene all too easily opening itself up for criticism on unnecessary content.
Despite its unpleasantness and ‘torture porn’ angle I enjoyed the original ‘Wolf Creek’, and the horror fiend in me certainly responded to the nastiness on display here, but it still doesn’t make it a film the general public should rush out for. Jarratt is superb as Taylor, evenly straddling poised psychopath with unhinged lunatic, and Corr is a great find and really sells the survival aspect of the film, and their commitment to the material is commendable but it’s unfortunate that overall ‘Wolf Creek 2’ is just another scary sequel that doesn’t flicker as bright as its predecessor.
My rating 2.5/5 (One meeting with Mick is suffice)