hugh jackman James McAvoy Jennifer Lawrence Michael Fassbender by Caroline Russo | on May 21, 2014 | 0 comments | in Film Release & Reviews | Like it 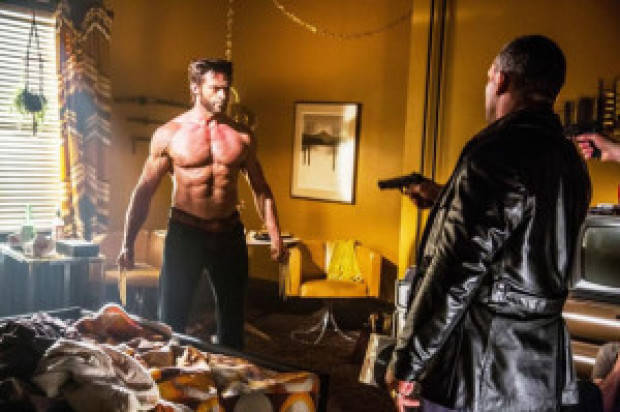 The Bryan Singer who delivered such misfires as ‘Superman Returns’ and ‘Jack the Giant Slayer’ is thankfully nowhere to be found on ‘X-Men: Days of Future Past’ as the director who gave birth to the series back in 2000, and followed up with a superb sequel that, to this day, remains a highlight in the comic film universe, effortlessly slides back into directing duties, weaving disparate threads of a crowded narrative together in a relatively cohesive fashion. In a bid to combine the surviving members of the original ‘X-Men’ trilogy with the ensemble gathered for 2011’s prequel ‘First Class’, Singer’s sequel adopts a time travel theme which comes off as the most logical explanation to have the X-Men of past and present share a timeframe. Occasionally coming off as a little too earnest, with some of its enormous cast understandably getting lost in the narrative, ‘Days of Future Past’ still works for the most part, effectively honouring its source material in the process – a comic book plotline from 1981’s ‘The Uncanny X-Men’.

The film starts in the bleakest of futures where our titular crew are being mercilessly hunted down by a horde of robots known as Sentinels. Under the direction of perennial frenemies Magneto (Ian McKellen) and Professor Charles Xavier (Patrick Stewart), a plan is hatched to transport Charles’ consciousness to his younger self (James McAvoy) in a bid to terminate the Sentinel Program, which all derived from the assassination of Sentinel founder Bolivar Trask (Peter Dinklage) at the hands of shapeshifter Mystique (Jennifer Lawrence). With Professor X’s mind unlikely to survive such a risky experience as time travel, Wolverine (Hugh Jackman) takes it upon himself to volunteer due to his regenerative powers. Travelling back to the 1970’s Wolverine has to locate both Charles and a younger Magneto (Michael Fassbender) at a period when they couldn’t be more separated from each other. Sounds simple enough right?

The film, as intricate as its plot appears, is remarkably easy to follow despite threatening to fall foul of its own premise with the parallel time frames operating smoothly against one another. It’s easy to attack the films logic, and it certainly plays fast and loose with the timeline of the overall series, but the film earns credit for its bold ideas and, more often than not, successfully executing them. The 1970’s setting doesn’t get quite as much traction as one might expect, although the notion that JFK was a mutant, and Magneto, with his ability to persuade metal, was responsible for curving the bullet that ultimately killed him certainly proves the film does have a sense of humour – an additive Singer wisely peppers throughout a relatively dire action outing; a prison break sequence involving a mutant known as Quicksilver (Evan Peters), dubbed due to his incredible speeding abilities, is undoubtedly the film’s highlight as his slow-motion perspective on life is gloriously highlighted whilst those remaining in the room are near-frozen in time.

With such a vast revolving door of talent on board there were always going to be casualties, and trilogy cast members Halle Berry (as weather manipulator Storm) and Anna Paquin (energy absorber Rogue) certainly feel the pinch of “too many cooks”, with Paquin in particular seeing her screentime reduced to no more than a literal second, indicating the cutting room floor has at least one substantial Rogue scene in its midst. Whether it is her character’s heavy involvement in proceedings or her star power alone, Jennifer Lawrence is the lead female here with her slinky strut and naked blue form commanding attention whenever she appears. Admittedly there’s a slight underwhelming nature to her performance but that is more due to the story than her capabilities as an actress; I did have a great deal of fun witnessing her numerous acrobatic attacks though, as well as hearing her speak a multitude of different languages.

As for the men, it’s Jackman and Fassbender that walk away with the film, elevating every scene as they move along. Jackman’s more than comfortable as Wolverine now having donned the grunt and claws six times prior, and at 45 years old he’s never looked better, and Fassbender, arguably one of the more stunning leading men to grace the screen as of late, is purely graceful in the kind of villainous role only he can make affable. The majority of actors involved here are all better than the material they’re offered but it’s their agreement to what they’re working with that benefits the film overall.

Alarmingly restrained in terms of special effects-driven set pieces, the climactic sequence involving the White House and a rogue stadium being the only major culprit, ‘X-Men: Days of Future Past’ manages to succeed in spite of itself, re-jigging the series’ history in the process and setting itself up for the inevitable sequel, 2016’s ‘X-Men: Apocalypse’, which gets its own brief look-in in the now mandatory Marvel post-credit sequence.