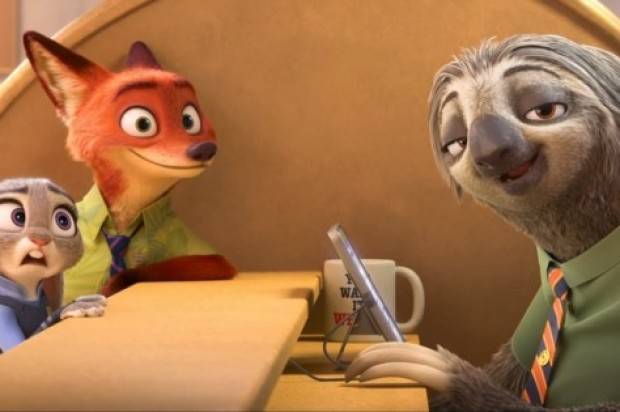 Many an animated film tend to preach a message of some kind within the compounds of their seemingly fluffy story, but with ‘Zootopia’ Disney have stressed the importance of community and ignorance of judging a book by its cover in such a heartfelt and clever way that it never feels like its forcing its values down the audience’s throat.

Apart from its subtlety in that field, there’s so much else to love with this film as it creates a magical world you’ll want to visit time and time again, it’s voice casting is sheer perfection, and it’s one of the most visually attractive features to grace the screen in recent years. The idea of a vast metropolis populated by countless talking animalistic species could’ve been easily dismissed – it’s certainly a subgenre that’s been bled dry – and a motor-mouth rabbit trading spurs with a sly fox? You’d be forgiven for assuming the most basic of outcomes. Fortunately, in place of one-note characters, cheap jokes, and endless momentarily-topical pop-culture references, ‘Zootopia’ actually cares about the audience its entertaining by delivering a smart script and a plot-line that incorporates mystery components that bring to mind such noir classics as ‘Chinatown’ and ‘L.A. Confidential’.

Set in a world where animals big and small have set aside their differences to live in a state of harmony, the film focuses on young bunny Judy Hopps (voiced by Ginnifer Goodwin), who leaves the safety of her hometown to pursue her dream of becoming a police officer (no bunny has ever earned a role in that department) and, despite the constant worry from her parents, her perseverance pays off as she lands in a squad consisting of more intimidating animals like elephants, wolves and water buffalos. Initially passed off as unworthy to solve legitimate crimes, her stern officer (Idris Elba) saddles her with parking ticket duty before she unexpectedly stumbles upon a valuable clue that could help solve the department’s biggest case: the disappearance of a dozen predatory animals from the city. With the help of Nick (Jason Bateman), a scheming fox, Judy defies all orders and lands herself a 48-hour window to crack the case.

A far-more developed and intricate story than one might expect, ‘Zootopia’ is a treat for audiences young and old, though children expecting a song-and-dance type Disney feature with pictorial gags and toilet humour will be sorely disappointed, and perhaps a bit frightened, at the dark mystery that the film centres on. Visually, the film is a marvel with directors Byron Howard and Rich Moore, along with the many animators, creating such a sumptuous world that you’ll almost need multiple viewings to truly appreciate all the intricacies they have bestowed upon us. The city of Zootopia consists of its own various boroughs, all of which come with their own unique personality; Little Rodentia, a district inhabited by tiny mice, being one prime example.

Quite simply, ‘Zootopia’ is an immense triumph for all involved, from the lively musical score to the hoard of talent supporting the perfectly cast Goodwin and Bateman; Alan Tudyk, Jenny Slate, J.K. Simmons, pop singer Shakira and Octavia Spencer just some of the stellar players. A film that is funny, interesting, captivating, clever and genuine, ‘Zootopia’ is another winner off the Disney factory line.