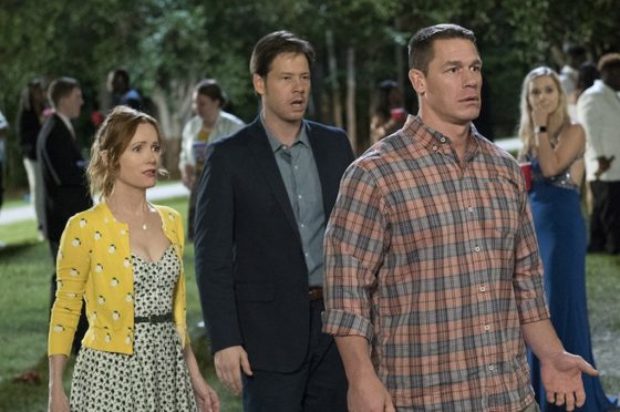 The teen sex comedy has always been a particularly male-centric genre. Cinematic high-schoolers throughout the last few decades who have broached the subject of popping their cherries – the raucous boys of ‘Porkies’ in the 1980’s, the relatable everyday teens of ‘American Pie’ in the 90’s, the foul-mouthed outsiders of 00’s ‘Superbad’ – have all been from a male perspective, so it’s with a refreshing change of hand that ‘Blockers’ arrives to confidently penetrate the doors of this long-running boys club.

Marking the directorial debut of ‘Pitch Perfect’ screenwriter Kay Cannon, ‘Blockers’ is armed with a familiar premise in that it focuses on a trio of high-schoolers who mutually agree that their upcoming prom night will be the setting for their respective losses of virginity. Similar to the aforementioned ‘American Pie’ where Jason Biggs and his cohort of randy classmates made the same pact, Cannon’s film flips the gender perspectives by having our trio of virgins-to-be-no-more as a close-knit group of girlfriends who are surprisingly, and refreshingly, level-headed about their decision; popular blonde archetype Julie (Kathryn Newton) is ready to consummate her relationship, quick-witted Kayla (the delightful Geraldine Viswanathan) has decided on a viable option she deems acceptable, and geeky Sam (Gideon Adlon) is questioning her sexuality, so bedding her prom date seems like a safe bet to confirm her identity status.

Whilst the girls are all secure in their decision (and writing duo Brian and Jim Kehoe make a point of never having the girls feel forced into their agreement), their helicopter parents are much less so. In fact, Julie’s bubbly, overprotective mother Lisa (Leslie Mann), Kayla’s alarmingly sensitive father Mitchell (John Cena), and Sam’s unreliable dad Hunter (Ike Barinholtz) go certifiably insane in their attempts to block any and all male genitalia from coming within the vicinity of their daughters. It’s a welcome twist in that it’s the parents whose outrageous actions take focus, leading the parallel storyline of their daughters evening to become overtly outlandish purely through the course of their misguided parents.

Similar to the recent ‘Game Night’ or 2017’s surprise breakout ‘Girls Trip’, ‘Blockers’ is further proof that a seemingly simple premise can rise above itself if it both thinks outside its boundaries and has an ensemble willing to go along for the ride. Mann continues to display her strength as a comedienne in a role that she injects with enough honesty to forgive her character’s faults, whilst Barinholtz downplays his usual overbearing man-child shtick to surprisingly act as the unlikely voice of reason amongst the parents, but it’s Cena who emerges as the MVP in another solid comedic turn that is quickly becoming his staple routine as an actor; the charismatic brick of a man featuring heavily in two of the film’s funniest sequences – one involving chugging beer through an unexpected orifice, the other where he interrupts a blindfolded sex game between two fellow parents.

Running a brisk 102 minutes, ‘Blockers’ manages to avoid slowing down for any unnecessary sentimentality (although there is quite a lovely exchange between Sam and Hunter that wouldn’t feel entirely out of place in a production like ‘Lady Bird’) and maintains its laugh quota in a consistent manner. This is a big crowd pleasing comedy that subtly breaks convention in its treatment of women whilst preserving its mainstream mentality to keep audiences at bay.