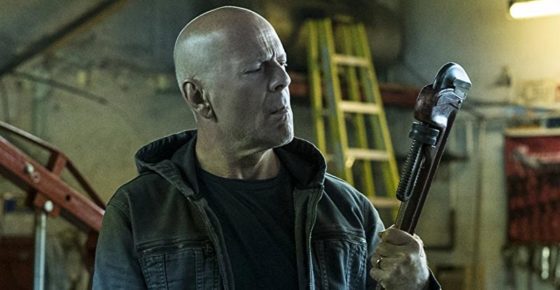 In the wake of the Stoneland Douglas High School shooting in Florida, as well as renewed debates on gun control, Eli Roth’s remake of Charles Bronson’s 1974 violent vigilante outing ‘Death Wish’ is garnering an ill-timed release. Roth’s take is far from being overly intelligent enough to navigate the controversy storm it’s weathering, but does it at least stand on its own two feet as a passable actioner?

After spending the last few years relegated to the land of straight-to-DVD productions, Bruce Willis broods his way back to the big screen here (his first lead role in a cinematic release since ‘Red 2’ in 2013), delivering a particularly lifeless performance that indicates his love for the craft is waning considerably. Roth’s film does its best to paint Willis’s surgeon Paul Kersey as an everyday-type who devotes his downtime to his loving wife (Elisabeth Shue, delivering one of the film’s few investing performances) and daughter (Camila Morrone, leaving a nice impression), but given that we are aware where his character will go as a result of the former’s death and the latter’s fatal attack, it’s a tough sell to the audience that Willis will play anything other than a brute.

Unlike the original ‘Death Wish’ which painted Bronson as anything other than a hero, Roth opts to justify Willis’s brutal slayings on the men that attacked his family. It’s a mind-frame we can understand but the script often calls on Willis to kill criminals unrelated to the assault on his family, leaving the idolisation around his character somewhat disturbing. There’s also a glee that Roth showcases in the film’s violent sequences, though it proves not entirely surprising given the director’s previous work includes such horror titles as ‘Cabin Fever’ and ‘Hostel’; one particular sequence involving a raised-up car in an after-hours autoshop results in a grisly offing that certifies the film’s R18+ rating.

There’s no doubt an audience out there who’ll lap up the machoism on hand here, likely to be those who won’t see the relation between the slight gun laws displayed in the film and the current predicament happening in the real world, but as far as vigilante movies go, this hardly registers even on a mediocre scale. The similarly themed Jodie Foster vehicle ‘The Brave One’ and Kevin Bacon’s revenge tale ‘Death Sentence’ are far better examples of the genre done correctly, and you’re best off watching either of those or revisiting the original ‘Death Wish’ before remotely considering this.