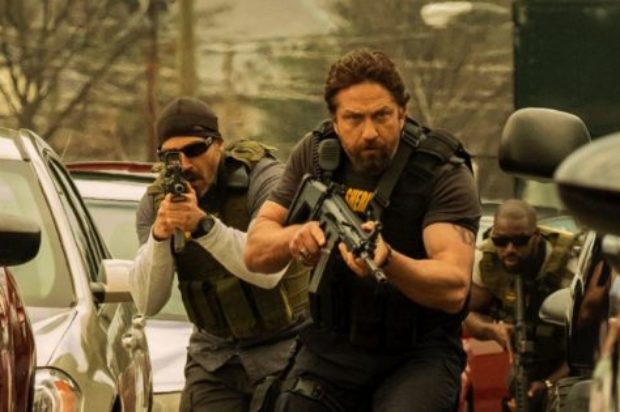 That’s the extent of the thought process I imagine was behind writer/director Christian Gudegast’s ‘Den of Thieves’, a remarkably unoriginal actioner that’s shameless in its beat-by-beat reworking of Michael Mann’s aforementioned genre classic.

Adding in a near-offensive level of machoism to drive home just how testosterone-fuelled one has to be to survive on the mean streets of Los Angeles, Gudegast’s attempt at making his film seem gritty comes off as anything but. And it’s a shame too as there is somewhat of an entertaining film contained within the overblown script and punishing 140 minute running time.

Opting for a toxic superiority that does little to endear his character, Gerard Butler (the actor looking particularly haggard with his scraggly beard and over-used body ink) leads the charge as L.A. Detective Nick O’Brien, a hard-edged sort who is determined to take down an elite crew of bank robbers who have so far eluded the authorities at every turn. The crew’s latest target is the Federal Reserve, a bank so heavily guarded that a planned robbery would be deemed a suicide mission for all involved.

But we wouldn’t have a movie if there wasn’t at least a break-in attempt, and ‘Den of Thieves’ sets up an elaborate heist of sorts in the film’s overblown, yet admittedly entertaining finale where Nick faces off against hardened marine-turned-criminal Merrimen (Pablo Schreiber, looking considerably more bulked-up compared to his familiar turn as lecherous prison guard Mendez on TV’s ‘Orange is the New Black’) who has orchestrated the robbery.

Whilst the film serves predictability for the most part, and both Butler and Schreiber do little outside the typical archetypes of their characters, ‘Den of Thieves’ threatens to come fully alive when it places O’Shea Jackson in the drivers seat. A skilled driver, and one of the main figures in pulling off the planned robbery, Jackson’s character Donnie is a stronger contender than any of the other players involved (rather ironic given his penchant for downplaying the masculinity his larger-in-stature-cohorts seem to believe is a necessity to possess in their bid to define their heterosexuality), and it’s he who steers the film towards acceptable watchability.

Overall ‘Den of Thieves’ is a particularly unnecessary film, with a script that reeks of unoriginality and an air of indulgence that is highly misplaced. It can’t be denied that Gudegast shows promise in his field though with an armoured car heist late in the film staged rather spectacularly, and an evoking of acceptable, if stereotypical, performances from his capable cast (even rapper 50 Cent doesn’t completely embarrass himself as far as acting goes). A B-grade slice of celluloid that overstays its welcome and under-delivers on intelligence, ‘Den of Thieves’ should satisfy undemanding cinema goers but is likely to find longevity on the streaming services where its punishing length can at least be broken down for those whose patience is tested.