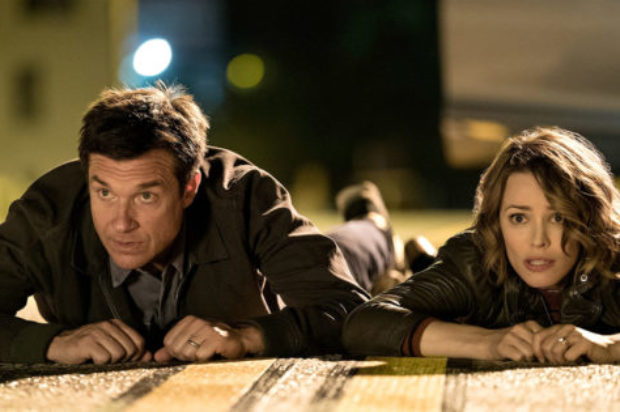 Whilst it reaches in the coherent storyline stakes, ‘Game Night’ still pulls off its high concept with enthusiasm and confidence thanks to a dedicated cast and a biting script that plays to their strengths.

The premise to John Francis Daley & Jonathan Goldstein’s black comedy is simple enough on the surface – a trio of couples have their annual game night challenges tested when they’re thrown into an active “murder mystery” adventure which will send them on a chase around the city – but thanks to Mark Perez’s twisted and witty script, the possibilities of where the night could go and the individual dynamics of each couple keep proceedings far more entertaining than one would expect.

The violence that is implemented amongst the laughs appears surprisingly organic as lead competitive couple Max and Annie (Jason Bateman and Rachel McAdams), their close friends Kevin and Michelle (Lamorne Morris and Kylie Bunbury), and constant bachelor of the group Ryan (Billy Magnussen) are coerced one evening into the aforementioned mystery event by Max’s brother Brooks (Kyle Chandler), the charismatic type who lives the life Max envisions for himself. We all know the night won’t go as planned, and when Brooks is beaten to a pulp by a duo of armed crims right in front of the others (who all simply watch with various degrees of interest) within moments of explaining the rules, the film embraces the ridiculous and appears to revel in letting the characters play along in situations inherently dangerous in a completely casual manner; McAdams throwing her misplaced confidence around with legitimate criminals, unaware the weapon she’s brandishing isn’t a prop, is just one of many highlight moments where the characters naiveties are superbly demonstrated.

Whilst the plot does throw in a classic MacGuffin to keep the group moving forward (Brooks has gotten himself caught up with Bulgarian gangsters and has to retrieve a priceless faberge egg for leverage – just go with it!), it’s the push-pull dynamic from each of the couples and the varying degrees of conflict they face that really sets the film alight. Bateman and McAdams are an absolute delight as the most competitive couple of the group, the script playing to both their strengths as comedians (McAdams hasn’t been this much fun since her decade-old turn in ‘Mean Girls’) despite giving them the most physical of the roles too in terms of action; the pay-offs to some of these sequences are hilarious though, particularly the moment McAdams intends to bump off a villainous henchman via an airport conveyor belt.

Morris and Bunbury earn hefty mileage out of their couple’s argument throughout when an early throw-away gag regarding her one-time fling with a certain celebrity remains a constant source of material (the ultimate reveal earns a decent laugh), and Magnussen as the most dimwitted of the group rides his character’s ineptitude just far enough so that his charm never wavers; it helps that his running mate is the supremely beguiling Sharon Horgan as an Irish co-worker who bucks the trend of the usual air-headed bimbos he dates by showing him up every opportunity that arises.

If there’s one character though that steals ‘Game Night’, it’s Jesse Plemons. As Max and Annie’s clearly disturbed next-door neighbour Gary, the actor delivers a turn that is beautifully understated in all its sinisterness as he lurks about with little more than a deadpan expression and his beloved pooch Bastian under his arm, carrying the dog in a manner fit for a Bond villain; the dog itself earning a large laugh in one standout scene involving a heft of blood that leaves the poor dog in a blood bath of sorts.

Ultimately, Daley and Goldstein (the duo having tested the comedy waters as screenwriters on ‘Horrible Bosses’ and directors of the 2015 ‘Vacation’ reboot) have delivered a highly polished film that surprisingly succeeds in the action stakes just as much as it does as a comedy, and whilst their product won’t exactly be earning classic status within the genre, it’s far stronger than one would expect, thanks in large part to a capable cast who embrace the outlandish premise and refuse to buckle under it.