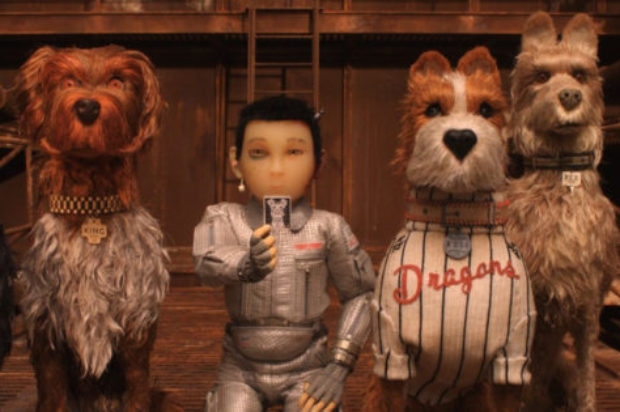 Similar to what he achieved with ‘The Fantastic Mr. Fox’, in that he presented an animated adventure for both young and old to enjoy, Wes Anderson’s ‘Isle of Dogs’ is a charming fable that stresses the importance of loyalty between man and dog in a manner that doesn’t pander to its younger viewers. Whilst at times it may be a bit too mature – if you’ve ever wanted to see a stop-motion medical procedure you’re in luck – the overall accessibility of it all deems it worthy nonetheless.

Set in a Japan where all dogs have been sent to a distant landfill (“trash island” as it’s so lovingly dubbed here) due to a sickness outbreak amongst them, ‘Isle of Dogs’ wastes little time in setting up its bizarre plot-line. The first dog to be offloaded is Spots (voiced by Liev Schreiber), a loyal guard dog who protects the Mayor’s ward, Atari (Koyu Rankin), an orphan that the Mayor has taken in. Desperate to find Spots, Atari steals a plane and travels to trash island, only to crash land and find himself on the receiving end of enthusiastic assistance from the pup pack of Rex (Edward Norton), King (Bob Balaban), Boss (Bill Murray), and Duke (Jeff Goldblum); unofficial pack leader Chief (Bryan Cranston), a stray mutt with seeming anger issues, helps against his better judgement.

Though the choice for the predominantly American cast to be voicing characters housed within a Japanese setting may be cause for cries of whitewashing, Anderson tiptoes around any controversy by explaining in the opening moments that the dogs have had their barks translated into English for the film; the Japanese characters however speak in their natural tongue without the assistance of subtitles, with Frances McDormand’s news anchor of sorts acting as an interpreter throughout. It seems like a perfectly Wes Anderson thing to do, and he charmingly gets away with it. Plus, it’s difficult to argue with a film that presents a Tilda Swinton-voiced pug as an oracle whose “futuristic visions” are anything but.

Whilst the story itself is wholly bizarre, and the overall running time feels like an area that could’ve done with a trim, ‘Isle of Dogs’ drives home the importance of adherence in a way that isn’t too saccharine. Obviously this will be a film that’ll resonate stronger if you have a pet, but there’s no less to appreciate if you don’t as the pure artistry of it all is beautiful to view, even if Anderson’s signature brand of skewered humour may not always land with audiences unversed in his style of storytelling.