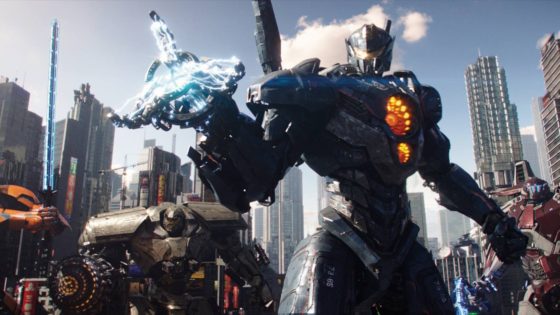 Given his penchant for dark, more gothic views on material, Guillermo del Toro’s foray into big budget filmmaking – 2013’s ‘Pacific Rim’ – always seemed a little odd.  Capable of delivering so much more than what that film ultimately was able to, del Toro may have injected some of his usual fantastic-ness into proceedings, but a procession of sequences featuring giant robots fighting mythical creatures interspersed with questionable acting resulted in a destructively silly actioner that was more trash than treasure.

Whilst the first film brought in $100 million at the US box office, it’s substantial near $200 million cost meant it was far from profitable, but taking into account the impressive international numbers ($300 million) and a sequel really isn’t all that unusual; it’s actually quite encouraging to see a studio place faith in international numbers.

But is this sequel actually worth it?  ‘Pacific Rim: Uprising’ plays out like the wayward cousin of the original, induced on a diet of sugar and lacking the basic skills to pay attention.  It’s ultimately a highly impersonal film (as was the first, despite del Toro’s involvement) with a Transformers-ness to it that indicates its tailoring to the lowest denominator, but it also can’t help but feel somewhat progressive in that it plays specifically to an international crowd (China and Australia feeling very much like targeted demographics), serves up the opportunity for a Chinese actress (Jing Tian) to save the day, and hands its leading duties to a British-Nigerian actor (John Boyega).

Set 10 years after the first film, Uprising catches us up to speed with a “Previously on…” opener that serves as both a reminder to those who have perhaps forgotten the events of the first or fresh audience members who may not be aware this is a sequel.  There’s so much going on in this opener alone (we learn Boyega’s Jake Pentecost is the son of Idris Elba’s since deceased General Stacker Pentecost living out his days as a smuggler, and not all corners of the world have completely recovered from the mass destruction indicated in the first film) that it seems unreasonable for DeKnight to give us more to chew on, but indeed he does, developing an everything-but-the-kitchen-sink mentality as we inevitably gear up for further carnage.

To be fair, a lot of the threat that comes for the unsuspecting characters in ‘Uprising’ is more the corporate folk building the Jaegers (the man-controlled machines designed to take out the threatening creatures).  Any political commentary that could be addressed on the dangers of such a device is glossed over though, with this loud film solely focused on the ridiculous action it feels almost too eager to unleash; with Sydney earning a prime supporting role in an indulgent mid-“plot” sequence that’s entertaining in all its wild stupidity as a new monstrous threat sets upon global domination.

A glorified B-movie with equal amounts of cringe-inducing overacting (Charlie Day hams it up to no end as a doctor whose link to the creatures is perhaps more intimate than one may like), wooden handsomeness (Scott Eastwood looks pretty but fails to have the personality to back it up), nonsensical action, and enough rousing speeches to inspire the most down-trodden of viewers (Boyega’s leadership role to young cadet Cailee Spaeny is the closest the film comes to expressing something remotely genuine), ‘Pacific Rim: Uprising’ is one of those films you could never accuse of being good, but you can’t help but have a good time with.