city of gold co production INDIGENOUS QLD THEATRE COMPANY racism theatre by Caroline Russo | on July 6, 2019 | 0 comments | in On Centre Stage | Like it 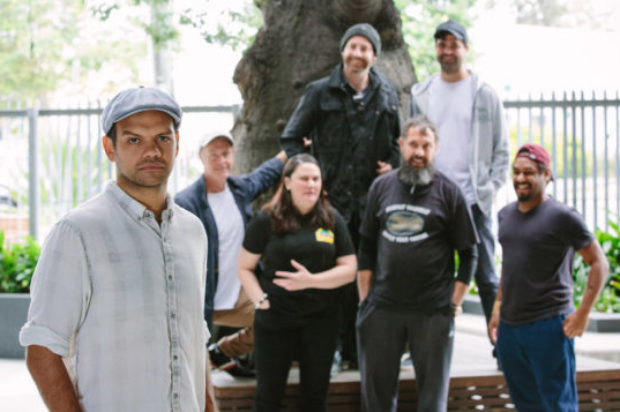 City of Gold by Meyne Wyatt.
Review by Doulas Kennedy

This is the new generation of outspoken protest articulating grievances relating back to the beginning of white settlement.

It is sharp, powerful, humorous, testing, and ultimately challenging, with a drive that only the energy of youth has the ability to sustain.

Wyatt, whose career has taken him from the Bell Shakespeare to film’s The Sapphires and TV’s Neighbours, has written a premiere paly with a vibrant message.

At times it appears that the debut work could benefit from more workshopping, there’s room for editing, and the narrative suffers from some coherence (particularly in the later scenes).

But overall it was strong enough to bring the first night audience to its feet and induced thunderous applause. No mean feat.

The show opens with actor Breythe (Wyatt) working as a city actor on a patronising TV advert for lamb as a stereotypical Aboriginal complete with loin cloth, spear and nominal canoe.

He hates the role but his distain turns to pain when he learns that his dad – who has cancer – has died in his Kalgoorlie home town.

The rest of the story unfolds in his Western Australian base where he joins forces with his run down elder brother Mateo (Matthew Cooper), sister Carina (Shari Sebbens) and cousin Cliffhanger (Jeremy Ambrum).

There in the City of Gold things are tense as the community is fractured in the wake of the death of a 14-year-old boy who has been run down and killed.

The tension has been stepped up when the white motorist doges a manslaughter charge in yet another case of indigenous injustice, which has peppered the history of white Australia.

The family is both united and divided as the ghost of the father (Maitland Schnaars) hangs over them – well particularly Brethe and they have to deal with ongoing white prejudice.

The result is a combination of indigenous debate, humour and conflict with an explosive couple of scenes in the second half.

There’s swirling conversations about racism, prejudice and injustice which have become part and parcel of the indigenous voice over time

The City of Gold cast is terrific and Meyne Wyatt has an exciting future as both as actor and now writer. This is all a part of modern voice of indigenous youth which won’t – and shouldn’t – be stilted.