Book review Close Your Eyes Kylie Thompson Michael Robothan by Caroline Russo | on October 6, 2015 | 0 comments | in Book Reviews | Like it Life hasn’t been kind to Joe O’Loughlin. The Parkinson’s that is slowly destroying his body will eventually claim his extraordinary mind, and his poor reaction to the diagnosis has cost him his wife and daughters. So when his ex-wife offers the olive branch of a summer with his family, Joe jumps at the chance, hopeful that perhaps he can start to rebuild his broken family.

Life, as always, has other plans. Miles away in a farmhouse by the sea, a mother and daughter are murdered. Though the mother’s death is brutal and bloody, the daughter is laid out tenderly in her bed like a fairy tale princess waiting for her Prince Charming.

The police aren’t requesting Joe’s help so much as ordering it. One of his former students, trading on Joe’s name and calling himself the ‘Mindhunter’ has sabotaged the case, leaking evidence to the media and stirring up public rage in the name of building his brand. The Mindhunter is the sort of forensic psychologist Joe loathes: more interested in the sight of their own face on a screen than in helping others. If there is any chance of bringing the killer to justice, Joe will have to pick up the pieces left in the Mindhunter’s wake, and try and narrow down the overwhelming list of suspects. As his life, and the lives of his loved ones, grow increasingly tangled in the life of the murderer, Joe will have to fight not just an increasingly violent killer, but his own failing body, to keep everyone he loves safe from harm.

One of the strengths of Robotham’s writing is that he doesn’t write his villains as simply evil, insane, and violent people. They’re complex, often sympathetic beings that readers can almost, almost relate to. There’s something especially chilling in the realisation that you can relate to the sort of emotional pain a villain has experienced somewhere in his or her tragic backstory, and there are few things scarier than the realisation that we could so easily have become the person who scares us the most. Like Joe, Robotham carries a life-long fascination with the psychological mechanics of humanity, and his writing is as much a battle to understand the unknowable as it is an enjoyable and chilling adventure.

There’s a tragic irony to Joe’s character. He is a man of considerable intellectual might being betrayed by his body, and struggling to navigate through the increasingly problematic realities of his illness. Joe’s body is failing, and that constant threat of his body’s rebellion at the worst possible time adds a heartbreaking layer of tension to the story being told. Joe could so easily be written as a tragic figure or victim in his life, and yet Robotham has made sure that Joe isn’t only sympathetic because of his illness and its impact on his life. For all the intellectualism, Joe seems like a genuinely nice guy. Sure, Joe is the sort of man who’d know far too much about you before you’d finished introducing yourself and an absolute pain at parties, but he’s also the sort of man you’d want by your side when trouble started. If you were a fan of the TV show ‘Lie To Me’, then Joe might be your next favourite leading man. Joe is the sort of man Cal Lightman could have been without the acidic personality.

Oftentimes in crime stories, the family of the protagonist are one-dimensional figures, there to highlight the sacrifices the hero must make to keep the world safe rather than being characters in their own right. Thankfully, Robotham has ignored this trope and created a series of likeable, spellbinding women in the O’Loughlin family.

Charlie, especially, is the sort of heroine the world needs far more of. Highly intelligent, witty, protective, and more than capable of rising to the challenges before her, Charlie is the sort of teen sleuth you can’t help but adore. Like her father, Charlie seems destined to spend her days chasing down murderers and protecting families, and I must admit I’ll be sorely disappointed if she never gets her own novel (or series).

For readers who haven’t stumbled upon any of Joe’s previous adventures, Close Your Eyes works as a stand-alone novel easily enough. Just be prepared for a sudden urge to find yourself copies of the rest of the series.

Close Your Eyes is published by Hachette, and is available on iTunes and Kindle, the publisher’s website, and at all leading booksellers. 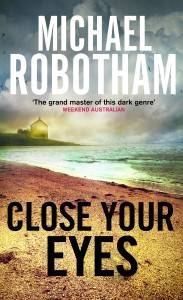 Rating: 4 and a half stars
Genre: Thriller