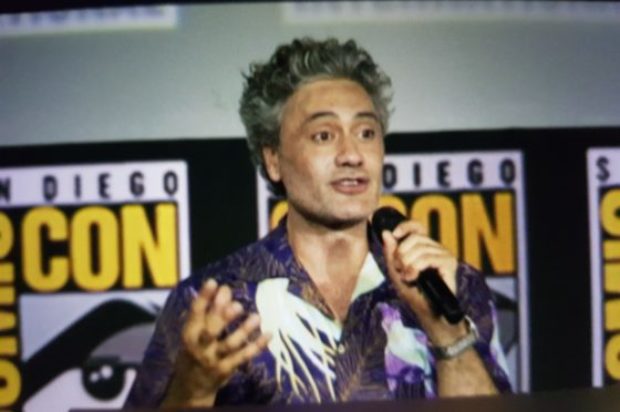 You had to be there to feel the excitement at Marvel’s Hall H panel at comic con San Diego.

Marvel President Kevin Feige brought to an end two years’ worth of speculation to run down the entire upcoming slate for Marvel’s fourth phase.

First up is “Black Widow,” a prequel story slated for May 1, 2020, and directed by Cate Shortland. The film, which is currently filming in London, will feature Scarlett Johansson, David Harbour, Florence Pugh, OT Fagbenle and Rachel Weisz. A first look was shown, with the villain Taskmaster teased.

The Disney+ series “The Falcon and the Winter Soldier” is slated for fall 2020. Feige brought out Anthony Mackie and Sebastian Stan, with Mackie donning the Captain America shield that was bequeathed to him in “Endgame.” A short clip confirmed that Daniel Bruhl would reprise his “Captain America: Civil War” role as Helmut Zemo.

The studio will unveil “Shang-Chi and the Legend of the Ten Rings” on Feb. 12, 2021, starring Simu Liu in the title role and featuring the villain Mandarin, who will be played by Tony Leung. A montage was shown revealing Easter eggs of the rings that had been peppered throughout a few of the previous MCU films including “Iron Man 3.” Destin Cretton will direct and Awkwafina will also appear in the film.

In spring 2021, the studio will release “WandaVision,” “another mega event series we’re doing on Disney+,” said Feige. “If you think that logo was strange, wait till you see this show; it’s unlike anything we’ve done before.”

He brought out Elizabeth Olsen and Paul Bettany, who will reprise their roles as Wanda Maximoff and Vision, respectively. Though Feige confirmed that the show would take place after “Endgame,” he didn’t explain the logistics considering Vision’s apparent death in “Avengers: Infinity War.”

“Last thing I knew I died in ‘Infinity War’ so I’ve literally never been this confused in front of this many people in my whole life,” said Bettany. Feige also revealed that the show would include an adult iteration of the character Monica Rambeau, whom audiences first caught a glimpse of as a child in “Captain Marvel,” played by Teyonah Parris.

For spring 2021, Marvel will debut the Disney+ series “Loki,” starring Tom Hiddleston. The audience chanted “Loki!” as Hiddleston appeared on stage. According to the actor, the show’s version of Loki will be the un-evolved character who tormented the heroes of the first “Avengers.”

Audiences went wild when Feige introduced “Doctor Strange in the Multiverse of Madness,” which is slated for release on May 7, 2021. “Just because Quentin Beck makes up lies about the multiverse doesn’t mean it isn’t real,” said Feige. He also revealed that it would be the first scary MCU film despite boasting a PG-13 rating.

Benedict Cumberbatch will reprise his role as the good doctor, with Scott Derrickson returning to direct. Feige also revealed that Scarlet Witch would appear in the series with the arc explored in “WandaVision” being reflected in the film. Later in 2021, the studio will reveal the “Hawkeye” event series and, along with Renner’s version of the archer, will introduce the Kate Bishop version of the character. The show will explore Hawkeye’s time as Ronin, revealed in “Endgame.”

The final 2021 film will be “Thor: Love and Thunder,” featuring Hemsworth and Tessa Thompson with Waititi returning as director.

Waititi revealed that the film would follow the “Mighty Thor” storyline written by Jason Aaron. “It’s full of emotion and love and thunder and introduces, for the first time, female Thor.” That character will be played by franchise veteran Natalie Portman in an evolution of her Jane Foster role from the first two “Thor” films.

Thompson, whose character Valkyrie was named new king of Asgard at the end of “Endgame,” shared a hint of how she planned to begin her reign.

“As new king, she has to find her queen,” said Thompson. “So that’ll be her first order of business.”

As the panel drew to a close, Feige teased what would be coming down the line in upcoming phases.

“I’m going to leave you with one more thing that I don’t think has been rumored about,” he added, before introducing Mahershala Ali to the stage and announcing the Oscar winner as the new Blade.

Later on the press line, Feige explained the decision to cast the star.

“Mahershala I think might actually be ‘Blade,’ frankly,” he said. “He’s amazing. He’s one of the greatest actors of our time. He came in after winning his second Academy Award to meet with us, and within about 10 minutes he was like, ‘Blade?’ and we were like, ‘Yeah.’ And it came together, it literally was just like that.”