Groundwater Country Music Festival (formerly Broadbeach Country Music Festival) has announced a slew of names to join its already huge 2018 line-up. An event that attracts music lovers young and old, the festival is held in the centre of the emerging hub of entertainment, the sunny Gold Coast. Better yet, the whole thing is completely free, making it the perfect holiday escape with friends or family.

Broadbeach Alliance is proud to add to its already packed line-up: 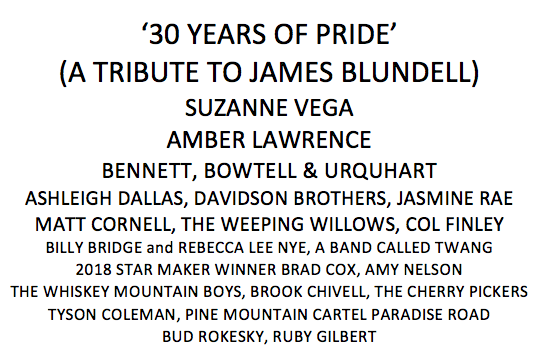 “In programming this festival, it’s important for us to cover all the bases in Australian Country Music and give a spotlight to both the veterans and the artists of the future,” said Festival Director, Mark Duckworth. “There’s such a cool variety coming to Groundwater in 2018, all with a different style of story to share.”

This second announce is headlined by a special and exclusive tribute show to an act acknowledged by many as single-handedly shaping modern Australian country music, James Blundell. He is credited with taking the best of rock and country to create a brand new sound that ensured success and found favour across all demographics. 30 YEARS OF PRIDE – A TRIBUTE TO JAMES BLUNDELL will feature the songs of James Blundell performed by some of today’s biggest stars – side by side with some of our most exciting new talents. Stay tuned for more info on that one…but rest assured…it will be special!

“Having watched this festival grow, I feel particularly privileged to be involved in the 2018 lineup. Some of the acts I’ve grown up in awe of… SUZANNE VEGA, KEVIN BENNETT, some I’ve watched from their first public performances, and all the artists involved in the ‘30 Years of Pride’, I’ve been involved with one way or another for years,” said James Blundell. “Broadbeach has always had a special place in my affections, as it was our family’s holiday destination since the late 1950’s when Dad’s parents bought a classic old (brand new then) beach apartment directly across the road from ’Kurawa Surf Life Saving Club’. Seeing that part of the Gold Coast mature into the precinct for the coolest country festival in Australia 2018 Groundwater Festival is very similar to watching your children grow up. It’s a great event, open, friendly, and jam packed with interesting performers. I’m thoroughly looking forward to seeing you there.”

Widely regarded as one of the most brilliant songwriters of her generation, SUZANNE VEGA’s 20-year career has made her creative and thoughtful music as distinct as it was when her voice was first heard on the radio in 1985. Her album ‘Solitude Standing’ was nominated for three Grammys (including Record of the Year), and included the song that would enter the cultural vernacular as her trademark hit, ‘Luka‘. An icon who paved the way for female folk singer-songwriters such as Tracey Chapman, Shawn Colvin and Indigo Girls, SUZANNE VEGA is an artist who continues to surprise.

AMBER LAWRENCE is an award-winning Australian singer-songwriter who captures the nation’s attention and heart with her songs about Australia; its people and the things that matter to them. After a huge Golden Guitar Awards this year – where she was nominated for six awards, and won three of them – AMBER LAWRENCE is ready to get everyone dancing at Groundwater this year.

These acts join Australia’s top country stars THE McCLYMONTS, off the back of last week’s win at the CMC Awards, where the girls took home CMC Group or Duo of the Year for the second year in a row. This is the third time the girls have won this award (which was established in 2015), adding to their CMC Artist of the Year Award win in 2013. They are joined by BILL CHAMBERS, TROY KEMP, and CASEY BARNES, as well as international favourites GRANGER SMITH, LILLIE MAE and JOSHUA HEDLEY, just to name a few.

Sister to the multi-award winning Blues on Broadbeach Music Festival, Groundwater is committed to bringing together a diverse range of music genres, grounded in country and folk, to Broadbeach and has gone on to become Australia’s fastest growing country music festival.

Each year Groundwater remains a highlight on Queensland’s calendar of events, featuring over 10 performance areas and some of the hottest names from Australia and all over the globe. As well as a huge program of live music, the festival boasts a location offering amazing food, bars, and family-friendly attractions that all ages can enjoy!

“Our city continues to emerge as a vibrant, live music hub for south east Queensland,” says Gold Coast Mayor Tom Tate. “We make no apologies about wanting to attract the very best in country music talent to the Gold Coast – and Groundwater is the perfect platform for that. I can’t wait to get down to the 2018 spectacular.”