crowed house LIVE NATION TOURS by Caroline Russo | on August 11, 2022 | 0 comments | in Uncategorized | Like it 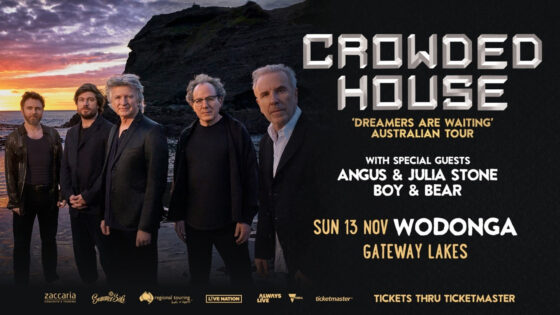 Live Nation, Zaccaria Concerts & Touring, Regional Touring, and Always Live are excited to announce that CROWDED HOUSE are bringing the ‘Dreamers are Waiting’ Australian Tour to Wodonga this November!

It is only the band’s third Australian tour in the last 15 years, so prepare yourself for an unforgettable performance under the stars at Gateway Lakes in Wodonga on Sunday, 13 November.

Don’t miss your chance to experience CROWDED HOUSE live as they perform legendary anthems from the band’s 35-year career, including ‘Don’t Dream It’s Over’, ‘Something So Strong’, ‘Four Seasons In One Day’, ‘Distant Sun’, and ‘Weather With You’, along with fresh new music from their latest album, Dreamers Are Waiting.

The band’s April Dreamers Are Waiting Australian tour dates played to full houses, rapturous audiences, and widespread critical acclaim, including a star turn at Bluesfest during Easter. The Guardian said, “A joyous and long-awaited return”, The Age stated, “Half concert, half singalong, Crowded House filled the Bowl with love”, and The Advertiser Adelaide proclaimed, “There’s a commitment to the purity of pop, the marriage of lyric and chord to create something close to perfect.”

Joining CROWDED HOUSE at the Wodonga show will be the incredible ANGUS & JULIA STONE and much-loved Australian band BOY & BEAR.

Angus & Julia Stone are a sibling singing/songwriting duo whose music spans intimate folk and dreamy indie pop. Angus & Julia Stone’s debut album, A Book Like This, was released in 2007 and charted in the Top Ten in Australia, with an international release following in 2008. Two years later, the group returned with Down the Way, introducing a bigger, bolder sound. A breakthrough success for the duo, the album debuted at number one in Australia and eventually earned them five ARIA music awards, including Album of the Year.

The Sydney 5-piece Boy & Bear first garnered attention when they uploaded their song ‘The Storm’ to triple j Unearthed in 2009. Their debut album Moonfire reached double-platinum sales, won five ARIA Awards, and three songs in the triple j Hottest 100. Their sophomore album Harlequin Dream achieved platinum sales and the #1 spot on the ARIA Album chart, followed up with Limit Of Love, which resulted in their second ARIA #1 album debut. After touring the world multiple times, the band became festival favourites, and sold out two Sydney Opera Houses.

Tickets on sale Tuesday 16th August at 10.00am (AEST)
Tickets are available at:
www.ticketmaster.com.au