DAME EDNA IS BACK 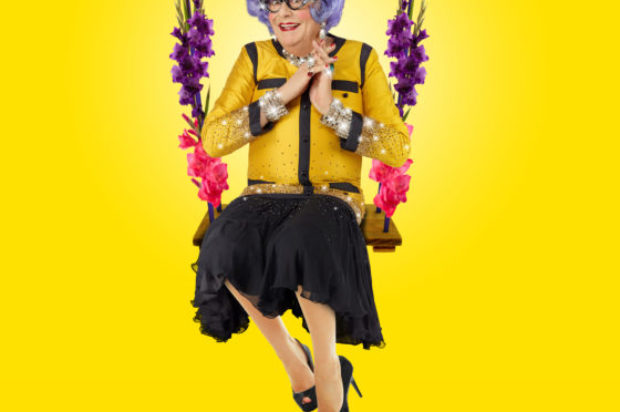 The grand dame of world theatre, Dame Edna Everage, has been forced out of retirement by the demands of her adoring “Precious Possums”, announcing a surprise tour of Australia in September and October.

Tickets to Dame Edna My Gorgeous Life national tour go on sale to the general public at 9am on Thursday 9 May. A TEG Dainty pre-sale starts 2pm Wednesday 8 May – register now at www.tegdainty.com

In a letter to her fans, Dame Edna apologised for upsetting them when she announced her retirement from public life, blaming her manager, “failed actor and attention seeker” Barry Humphries.

“One of the reasons I am adored pretty much worldwide is that I’ve always told you the truth; mostly the truth about yourselves, and even sometimes about me,” Dame Edna said.

“However this is an apology. It’s an apology for once telling you a wicked fib: a porkie, a cruel deceitful lie. I told you I had retired. That was a few years ago and when my announcement got around the globe a lot of people ‘freaked out’ to employ a phrase I never use. Some people actually lost the will to live. Some even self-harmed!”

While every star had to make allowances for minor acts of embezzlement, she said, Humphries had his hand in the till up to his armpit.

“My new team of advisors said I should close down all my companies, even my charitable foundation Friends of the Prostate, and re-start my career on a clean page,” Dame Edna said.

“That’s what I’m doing. That explains my so-called ‘retirement’ and withdrawal from public life. Now I’m reborn, fit as a fiddle, and rid of the leech who tormented me for so long. So, Possums, please do come and say hello to me. It would be lovely to see your faces again.”

Paul Dainty, President and CEO of TEG DAINTY, said he was delighted to welcome the reborn Dame Edna as she opened a new chapter with Dame Edna My Gorgeous Life.

Since she first appeared on stage as purple-rinsed Melbourne housewife Mrs Edna Everage, Dame Edna has toured Europe, the US and the Middle East, picking up a Tony Award for the 2000 Broadway production Dame Edna, The Royal Tour and a Tony nomination in 2004 for Back with a Vengeance.

“Dame Edna Everage is a great Australian export, an iconic performer, artist and star of stage and screen,” Mr Dainty said. “She has toured the world since the mid 1950s and we are delighted she has emerged from retirement so we can welcome her home again.”

Tickets to Dame Edna My Gorgeous Life national tour go on sale to the general public at 9am on Thursday 9 May. A TEG Dainty pre-sale starts 2pm Wednesday 8 May – register now at www.tegdainty.com