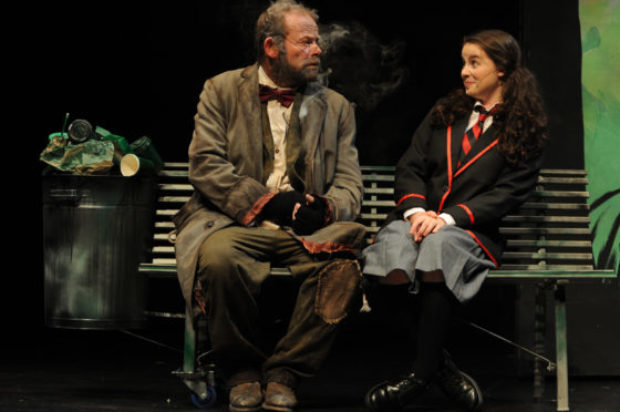  David Walliams’ award-winning book comes to life on stage for children 6-12 and their adults this June/July school holidays.
This charming original Australian adaptation plays at QUT Gardens Theatre from 24 June to 2 July as part of a national tour following its 2016 Sydney Opera House premiere.
“Mr Stink stank. He also stunk. And if it was correct English to say he stinker, then he stinked as well…”

It all starts when Chloe, just about the loneliest girl in the world, makes friends with Mr Stink, the local tramp. Sure he smells a bit, but he’s the only person who’s ever been nice to her. So, when Mr Stink needs a place to stay, Chloe decides to hide him in the garden shed.
Now Chloe’s got to make sure no one finds out her secret, but she’s about to learn that some secrets have a way of leading to disaster. And speaking of secrets, there just might be more to Mr Stink than meets the eye… or the nose…

The team behind The 13- 26- and 52-Storey Treehouses live on stage return with this touching, twisted and hilarious, and very smelly tale… hold on to your nose!
“boisterous fun…the young audience…thoroughly enjoy[ed] this quality production.” The Daily Telegraph
This heart-warming and comical adaptation will enthral and amuse audiences of all ages.